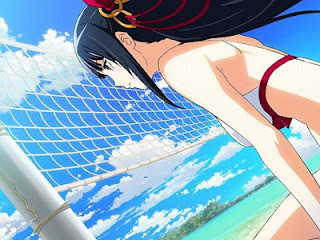 So there’s a little game called Conception: Please Have My Baby that has been released in Japan on the PSP. Amazingly (though likely under a different name), it is coming to the west too.

By all accounts it’s a really good game. Produced by Spike Chunsoft, it’s got reliable pedigree behind it, and the trailers and critical reception in Japan should see it become a cult hit in the West. But it’s also highlighted for me a hypocritical, borderline offensive trend in the west that I have felt it’s high time I commented on, and boiled down it’s this: games (almost always Japanese games) that are high in sexual content (whether perceived or genuine) are derided while violence (FPSers being the tip of the iceberg) is glorified.

Want proof? Wander into a typical game forum and mention Conception: Please Have My Baby or, even better, Love Plus. Contrast it to the reaction you’ll see over a hyperviolent game like Call of Duty or a Grand Theft Auto game. Fans will be fans regardless, but where those that criticise Call of Duty will do so for the flaws they see in the game itself, those that criticise the sex-heavy games criticise the people that play the game. There is little discussion out there about how Conception or Love Plus play. Rather, they have been labelled as “games for perverts” and dismissed on that basis.

In extreme cases it borders on racism. Have a look around, I guarantee you’ll find comments on “those weird/ sick Japanese,” out there in relation to these games. A week later the people that pass those comments will shake their heads as they type onto Twitter or forums about how incorrect the latest study linking Call of Duty to real-world tragic shootings is.

In other words, there is a built-in hypocrisy in mainstream gaming culture and the assumption that while violent games are kosher and people are able to emotionally distance themselves from them to enjoy the experience, those games that include sexuality are only for people that are unable to emotionally distance themselves from the game. The assumption is that the only way to enjoy a game like Conception, or Love Plus (or any of the games on this list, while we’re at it) is if you’re also the kind of person that goes hunting for a schoolgirl underwear vending machine if you’re in Japan.

But why is this? It’s a good question and it would take a far better sociologist than me to explain it comprehensively, but the reasons are cultural. Japan, for all its conservativeness, is a relatively open society when it comes to sexuality. Historically Japan has not been substantially influenced by the sexually repressive religions, and so somewhat paradoxically the culture that has a million different cultural rules demanding who you can address in what fashion has relatively few taboos about sex. It’s not being progressive (like parts of Europe, which have broken away from tradition to become liberal nations), it’s just a non-issue.

This has given rise to an unusual sense of humour that doesn’t always translate in the west. Sometimes it does, but when it hits a raw nerve of sorts – an area that, like sex, is still an uncomfortable topic in the west – much of the humour gets lost. The Atelier games, or Hyperdimension Neptunia, and I’ll be my house that Conception is the same – these are funny, charming games. Love Plus, for all its reputation, isn’t even about sex. It’s a teen romance story, little different to a movie like Ten Things I Hate About You.

Occasionally a Japanese developer gets away with the sexual content, but that’s only when they frame it in terms that westerners understand. Grasshopper Manufacture is the ideal case study here. Shadows of the Damned and Lollipop Chainsaw (especially Lollipop Chainsaw) are filled with sex, but because the developer, Goichi Suda, has framed his games within the grindhouse genre, the associations there have earned his games a pardon from the western gaming community. Most Japanese developers are not trying to make games specifically for western audiences though. GUST sure isn’t, so a lot of the character of the games GUST produce is lost in translation.

And that miscommunication has unfortunately put people off games that are actually quite good. If we’re able to talk about Call of Duty without spending ten paragraphs on the violence and the impact that’s going to have on the brains of young children, then we should be able to talk about these Japanese games without wasting words qualifying whether they’re perverted or not.