The developer is touting the game as a “completely new approach” to music games since it hands you, right off the bat, a sandbox of sorts to play around in. Basically, you can set yourself up with any of the licensed tracks in the game and remake, redo, remix, and otherwise ‘jam’ right along side said track. It’s a pretty neat idea and one that actually does do something different with a game type that lives and dies with strumming to colors.

JAM Live Music Arcade is a completely new approach to the music genre with a real-time live music sandbox “JAM Mode” that allows the player to immediately build and customize their very own tunes, as well as a bonus “Arcade Challenge Mode” that plays similar to traditional music games. Starting with any one of the 30+ licensed songs featured in the game (including hits from Modest Mouse, Fallout Boy, Fatboy Slim, Owl City, Rise Against, Atmosphere and more), players jam with and remix all aspects of the song – guitar, bass, drums, synth and vocals – to experiment with the song and re-create it to their own personality. All of this is done with any one of the numerous compatible guitar gaming peripherals – the entire band is in your hands! Accessible and easy to get started, yet deep and almost endless to master, everyone can touch real music across a broad range of sonic tastes. JAM Live Music Arcade offers an immersive level of musical interaction that’s inspiring, powerful and contagious.

JAM might be just the thing for fans who’ve pretty much burned themselves out on the genre too. The game launches for both the PSN and the Xbox Live Arcade the week of May the 16th. 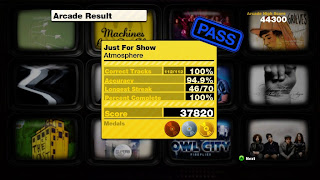