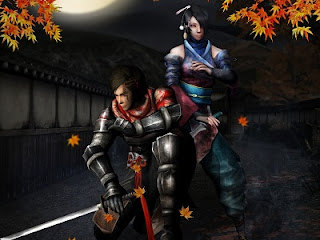 Two ninja games launched with the PlayStation Vita. One was Ninja Gaiden Sigma Plus; the definitive version of one of the most beloved ninja games ever crafted. The other was Shinobido 2: Revenge of Zen. You might not have heard so much about this game. Mostly because it was unfairly crucified in the majority of reviews out there.

It’s actually quite a lot of fun though. The basic idea of the game is to offer pure stealth and so it’s actually a very different kind of game to the all-action Ninja Gaiden. Here, Zen is quite a poor melee combatant. If his enemies notice him it’s pretty much game over. On the other hand stealth kills are very gory and very satisfactory, so it’s just as well that Zen is very good at that.

It works like this: There are three rival warlords out there. Zen, as a ninja, is a mercenary assassin for hire and each of those warlords wants to hire him. Each of the warlords wants to weaken their rivals without being implicated, so it’s up to Zen to sneak in, do the dirty work, and sneak back out again. In effect this means the game is made up of a range of bite sized missions with each having a direct impact on the fortunes of one of the warlords. Players are free to ally with just the one warlord or play the field a bit more. Each warlord brings something different to the table so there’s a bit of replay value in there in taking sides with different warlords each time. 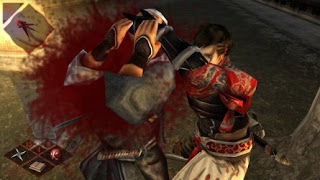 Missions range from standard assassinations to more exotic tasks such as scouting out an enemy’s defences, escorting or rescuing a defenceless civilian, and looking opponent’s treasuries. Each time though, you’ll be sneaking around in open, non-linear levels, plotting the best paths through enemy defences and making liberal use of ninja weaponry and trickery to either take down (from behind, for the stealth kill) or distract those guards in the way. In many ways the game resembles a feudal Japanese version of Metal Gear Solid; an enemy’s attention is represented by an eye icon on the side of the screen. It changes colour to represent how alert they are to Zen’s presence, though especially on the highest difficulty levels anything other than “unaware” is not a good sign for Zen.

Between missions it’s possible to head into an alchemy lab to turn some of the raw mushrooms, grasses and bugs that are found in the levels into various useful items for future missions. That inventory is critical since getting through the more difficult levels requires the smart application of explosive traps, sleeping drug-laced sushi and noisy wind up toys as much as it calls for the use of the sword. 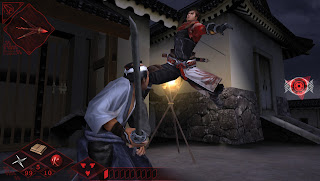 The early levels of the game can seem a touch too easy since the enemies, even if they discover Zen, are manageable. That all changes once armoured guards and rival ninjas join the party. At its best Shinobido is a tense, intelligent little game, where the slightest misstep can alert the enemy.

The problem is (and this is what many of the other reviews have harped far too much on) Shinobido rarely manages to hit those lofty heights. The controls can at times betray players – the grappling hook and the wall hug especially are too inaccurate for a game that requires precision. It does mean, very occasionally, there’s an unnecessary death on the cards. But it’s not as bad as some of the reviews would have you believe. Having played the PSP original I can assure people who have also played it that things are far better this time around.

A bigger problem is how repetitive the game can be. Environments are reused quite often. Enemy placement is different each time and so players will need to be on their toes each time they accept a new mission in a familiar environment, but the reality is that people will have a mental map of the entirety of the game within a few hours of play. That’s hard to forgive, but it must be said that the environments that are there are real sandboxes that offer players plenty of opportunities to be creative little ninjas. 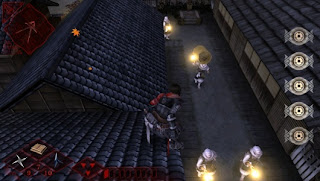 The melee combat when an enemy discovers Zen is very poor with awful computer AI and almost no depth to the combo system. That’s entirely beside the point of the entire game, though, and I simply restarted the level each time I got discovered. Some of the boss battles are unavoidable melee affairs though, and they represent a real low point to the game.

Another note in comparison to the PSP original, I can confidently say that the presentation of the game is vastly improved. Levels might look a little empty, but they feature interesting architecture and there are moments when, standing at the top of a building surveying the area, there is that soaring feeling that you’re playing as a medieval version of Batman. Character models are nicely detailed and are animated in a deliberately amusing fashion to lend the game a bit of levity. With the buckets of gore and dark story a little bit of humour goes a long way in making the game entertaining.

For the most part, Shinobido sneaks through as technically average, but with an X-factor that turns it into a very enjoyable game. Anyone who has enjoyed the genuine stealth games through the year – Metal Gear Solid and Splinter Cell – should get a kick out of this. The technical flaws that many other publications are claiming are in the game are nowhere near as bad as they’d have you believe. Stick the difficulty up high and things become very interesting very quickly.