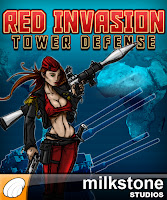 Xbox indie champ Milkstone Studios takes a shot at tower defense with one of its newest offerings. Does the developer score again, or might it be time to shut down the grid?

I didn’t start out as a fan of the tower defense genre when the whole ‘craze’ kicked off on touch screen mobiles a while back. But as it rolled ever onward (much like an assaulting force) I… still didn’t become one.

There’s just something about tower defense as a whole that doesn’t ‘do it’ for me at all. It’s just so simplistic and generally flavorless that it never holds my interest- no matter what kind of a coat of paint is applied. Milkstone Studios however, is another story.

MSS is one of my very favorite indie developers on the Live Marketplace and I’ve had the good fortune of reviewing several of their games here on Digitally Downloaded. Bottom line- they usually do quality work and produce stuff that’s fun to play around with. Usually.

This one is a little bit of a different story. Red Invasion: Tower Defense is a very straightforward tower defense game and while it does offer some newish elements, really doesn’t do anything special to expand upon or grow the genre too much. Though I’m not really sure what you could do that would really shake things up all that much even if you wanted to.

So here’s the deal – you get to place turrets to defend yourself. These turrets have to be strategically placed across the battlefield during real-time play in order to intercept the enemy. For their part in the proceedings, the bad guys move along a preset series of roadways (even the fly boys… for some reason) and simply march in a straight line towards the goal, which would be your base.

When the string of tanks, planes, or whatever reaches said base they crash into it and cause damage. Yes, apparently the enemy nation you’re defending against has no concept of projectile weaponry as ‘ramming speed’ seems to be the only order they’re capable of issuing to their units.

Now, the thing about your towers is that they need to be fed energy in order to upgrade and be able to tackle greater foes over the game’s 30 missions. The energy source (which comes from defeating enemies) is gathered by additional towers that you’ll also need to place.

Obviously, these have to be set up relatively close to where the baddie blowing up is being done as the energy needs gobbling. It’s a much needed strategic boost to the game type and actually kept me interested way longer than I usually am by tower defense titles. Later on in the game, things can really get hectic too as you have to balance building turrets, building collectors, upgrading turrets, and keeping the enemy in check and away from your base.

All in all it’s not bad, but it’s just not enough either. Remember, I’m not a fan to begin with so my opinions might very well be tilted, but there’s simply not enough to do in this game to get any kind of lengthy experience out of it. Even though Milkstone tried and added a few conventions that you don’t normally see, the base concept and activity is still very much erecting towers and holding off enemy units.

I’m absolutely sure that my general ‘blah’ feeling about the genre played a part in my take on Red Invasion: Tower Defense, although certain things are still undeniable. If you’re looking to play something with any kind of meat to it- look elsewhere. In my opinion, there’s simply not enough here to hold most gamers’ attention. The A/V presentation is ‘meh’, the story is non-existent (I honestly don’t even know why it’s called ‘Red Invasion’), and the gameplay is solid if unspectacular.

If you’re only looking for something to eat up some time now and then, you might have a better experience here than I did. It also should go without saying that if you’re a fan of tower defense, you’ll probably have a much better time. And if you are a fan, you might want to give Red Invasion a try, if for nothing else than the fact that it does at least attempt to do something new. That and it’ll only cost you a buck to add to your digital collection.