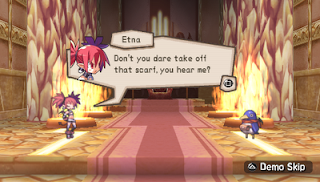 With the recent remake of Disgaea 3 fresh in our minds, it might be a good time to revisit some of Nippon Ichi’s other gems. Perhaps the best candidate is the overlooked 2D platformer, Prinny: Can I Really Be The Hero?. It may not be the best on the PSP, but it’s a solid first effort worth playing today.
Demon Lord Etna has had her cake mysteriously stolen. Enraged, she enlists the help of her many Prinny underlings to obtain cake ingredients for the “ultra dessert”. If the Prinnies can’t do it in time, they’ll suffer a fate worse than exploding.  Each level hides an ingredient, guarded by a boss.
The plot takes place in cutscenes, but to call it a “plot” would be decidedly charitable. The idea of cowards running through dangerous lands and fighting hordes of powerful demons to avoid being tortured by one demon is almost too strange to sound like it could work in a game. Rather, it serves as a backdrop to enable odd moments of humorous banter between characters.
The game’s premise is far more compelling than the plot. One hit will knock you dead and promotional material openly boasts about a high difficulty level, but you’ve got 1000 lives to work with. The difficulty for any given level tends to be dynamic, so as to ensure you get your fair share of torture toward the end regardless of what order you pick. The game gives you 10 in-game “hours” to collect all the ingredients and the amount of demons per stage increases as you complete the other levels. 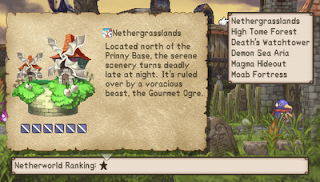 Still, for a game centered on challenge, most of the level designs are surprisingly lenient. Save points are littered throughout each stage, so you’ll never have to feel the rage of making it to the boss, dying and having to redo the whole thing. Granted, there are still a few obligatory moments of utter fury, but the game rarely forces you to memorize the level design in order to progress. There’s also a “casual” difficulty that allows a Prinny to be hit more than once and survive, but it ultimately feels like a cop-out. Besides, should you burn through your entire army of Prinnies, you’ll be rewarded with a stronger attack that should make progression easier.
Super moves aside, the Prinnies in their base forms are reasonably agile and boast a varied moveset. They can dash, double jump, grab ledges, and pound the ground (ala Yoshi’s Island) without breaking a sweat. With their trusty dual swords, they can swing rapidly to dispose of demons, slash in the air, or even fire energy projectiles (which are admittedly weaker than standard slashes, unfortunately). You’re well equipped for just about every occasion, so things come down to your reaction time.
The only real problem with the penguin soldiers is the way they jump. You can only influence the direction of their jumps at the moment you press the button – not in mid-air. If you’ve never played a platformer before, you might be able to catch onto this quickly, but seasoned veterans of the genre will complain about forced clunky controls and unfair deaths in a few segments.
The boss battles are where you’ll waste most of your poor Prinnies in an effort to swipe the ingredients for the Ultra Dessert. The grand foes tend to be quite durable and change up their attack patterns, but if you get hit just once, you’ll have to redo the entire bout. Each skirmish manages to feel distinct by adding some form of twist, whether that means duelling untouchable giants with bombs or having to combat two foes at once. 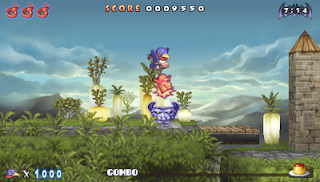 Even with all the explosive Prinny deaths, finishing the adventure shouldn’t take too long. While there aren’t too many stages in the game overall, there are several items to hunt down by replaying stages, which should provide enough bang for your $9.99 USD. Later in the game you’ll be able to play through the levels again on any difficulty you like, as well as access add-on content from the PlayStation Network. Should you invest in extra levels, you’ll be treated to a nice tie-in with the plot and characters from Disgaea 3.
For better or worse, some English voice acting was thrown in for the dialog sequences. Oftentimes, the character voices tend to be obnoxious and there’s no option for the original Japanese voices. The soundtrack itself is relatively docile and uninspired, but it gets the job done.
By now, you’ve probably seen a 2.5D platformer on the PSP. Backgrounds and several objects are composed of polygons, but the foreground denizens of the world are purely sprite-based. When attacking mid-air, an impressive effect shows off the game’s world from a new perspective.
Aside from minor control issues, Nippon Ichi’s first Prinny adventure still shines bright. It’s also quite affordable (more so than the sequel as of this writing), so any fans of Disgaea or those simply seeking a challenge must pick this one up.
-Clark A