Mega Man X on the iPhone was a decent rendition of the original, but it remains tough to recommend in the face of other versions. Mega Man Maverick Hunter X is arguably the greatest of these, running circles around the iPhone port and even giving the original a run for its money.
Like with the classic line of Mega Man games, you’ll guide an armed robot, X, through various 2D platforming stages. You’ll run, shoot, hop, and climb your way through each level in whatever order you desire (until the end-game stages, which follow a linear order). Once you’ve completed a level, you’ll square off against a boss, with your prize being the ability to use its attack. Given that there are eight main stages and several “final” levels, you get a decent selection of content to play with, even if levels do fly by within a handful of minutes each.
Between the health upgrades, X parts, boss weapons, and sub tanks hidden throughout the levels, there’s a ton of stuff to collect and X will surely be a behemoth if you decide to nab it all. You’ll need to repeat stages to obtain all the items, though, so this may not be a good one for fans of backtracking and repeating the same levels. They’re well hidden, too, so you’re likely to miss the upgrades without some sort of guide. 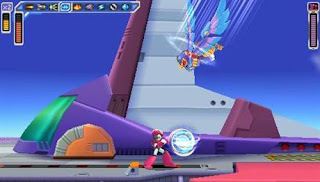 Once you’ve completed the story with X, you can also take control of the game’s antagonist, Vile. Other than his obvious deviations in terms of gameplay, you’ll have to hunt for the items all over again (this time hidden in entirely different places). It’s a novel excuse to play through the game again, though some will feel that not enough is added by simply changing your character.
After taking the disturbingly easy iPhone port for a spin, I forgot just how challenging Mega Man X can be at certain points. By and large, everyone should be able to defeat the robot master stages, but the few worthy segments can be downright brutal. To be specific, one level requires you to wall jump to reach a higher platform with a robot guarding it, but getting hit knocks you down to an area where a multiple enemies you previously defeated will respawn and inadvertently cause you double pain. If you don’t do it right the first time, you can drain your energy at unhealthy speeds. Thankfully, less seasoned players can always use heart upgrades and the “X Body Parts” to make X far more durable.
As with just about every aspect of the game, the music has been reworked too. The original score was brilliant for its time, but Maverick Hunter injects a jolt of rock n’ roll flair that spices up the entire game’s atmosphere. Even the menu music will get you feeling pumped. It’s also worth noting that all dialog and cutscenes are fully voiced in English. Some characters have better voices than others, but none are overly obnoxious (unless intentional). 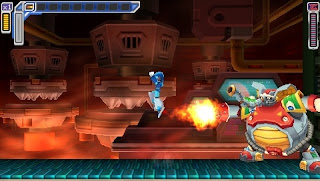 In place of the sprite-based graphics on the Super Nintendo are 3D polygonal worlds that remain in a 2D perspective. The backgrounds in particular have been mightily enhanced, as you’ll see numerous stunning backdrops throughout your adventure. The only real problem, visually, is that judging the distance required for a jump can be difficult given the angle at which platforms are sometimes displayed. This is offset by X’s ability to wall-kick indefinitely, so you always have optimal time to react and save yourself from falling into an endless pit.
Mega Man Maverick Hunter X makes many “remakes” of today look woefully inadequate. Couple that with the fact that it’s priced at a mere $9.99 USD and you’ve got one of the best deals on the PlayStation Network thus far.
-Clark A

The Nintendo download arrives on the wings of Icarus