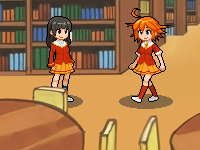 Cherry Tree High Comedy Club is a tiny little game that no one ever deemed worth localising. That is, before startup Nyu Media took a crack at it, and roped Capcom USA into publishing it on the major PC download platforms. The game suffers in the sense that it would be better off on the iPhone, iPad or a handheld console, but it’s still a heck of an experience, and a great localisation effort of a tricky game.

See, Cherry Tree High is a dialogue-driven game, with thousands and thousands of lines of dialogue. More than just a raw translation, it takes some serious work to rework the dialogue to make sense for a western audience, and hats off to Nyu Media because a few misspelled words aside, this is thousands and thousands of good lines of dialogue. The most critical component for a story-driven game to get right is the story (funny that), and Cherry Tree High is a lot of fun. There’s a gentle anime humour about the game, and a lightheartedness that is both throwaway but diverting. 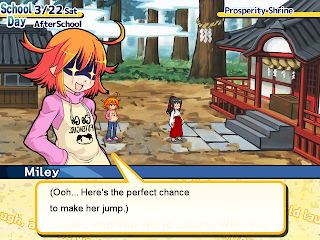 So, while it won’t win any narrative awards, the tale of a school girl on the hunt to recruit followers so she can set up a comedy club at her school is at least fairly original. How she does this is by learning the passions of a range of bright and cheery characters, and then making sure she can get friendly enough with those people to get them on board with the club.

So for instance, a local girl has a passion for videogames. To raise the friendship score with her and convince her to join the club, send the heroine off to play some video games or read some gaming magazines. All up there’s ten or so skills that affect relationships with the NPCs, and it’s important to balance out all of those ten skills as you’ll be needing them all.

Of course if this was all there was to the game it’d be too limited to be any fun, and thankfully Cherry Tree High has a little more to it to turn it into a fully-fledged game. One of the problems players need to manage is that the game is on a strict time limit, and the player has to achieve the goal of starting up the club within a generous, but not too easy number of days. To make matters more complicated, days are broken up into morning, afternoon and evening sessions. Most actions will move the time on, so players need to carefully manage what they spend their time doing. 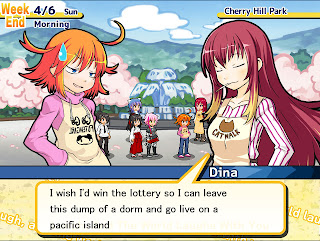 Then there’s the fact that many of the best activities cost money, and earning additional money takes up time and as a consequence, also earns fatigue. The only way to remove fatigue is to spend time resting, which other than removing fatigue achieves nothing. And then as a final requirement, there’s homework to be done, which will take up even more time slots.

So there’s a lot of management involved in this game, which forms the backbone of the interactivity. It’s never too forceful or demanding, as the developers want players to be focused on the story, not the playing. That’s ok, though, because there’s just enough playing to make players want to engage with the story.

In many ways, actually, this game reminds me of Love Plus. It features the same setting as a high school drama, and where that game gives players the goal of “training” or “skilling up” to impress a girl, this one involves the same process to have people join a club. The premise is slightly less interesting as a narrative concept, but as the most simple of simple simulations, it works and remains very charming. 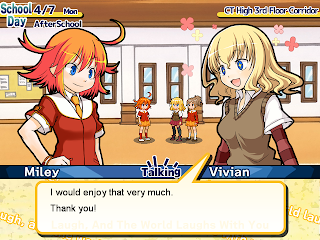 The visuals and sound both suit the game, though they’re not standout like the aforementioned Love Plus. They’re charming and cute, with colourful sprites and catchy tunes. Rather impressively, given the direction this game could have gone, there’s very little “otakuness” to it. As a result, almost anyone should be able to enjoy this game without feeling too stupid in the process.

Perhaps the most disappointing thing about Cherry Tree High is how completely inappropriate this game is as a PC game. It would feel far more natural as an iPad application or Nintendo DS/ 3DS title, where it would be portable and the simple visual style is more of a default. Stacked up against what does sell well on Steam and the like I don’t see how this will find anything but a niche following and that’s a pity, because Nyu Media did an awesome job in bringing it to us.