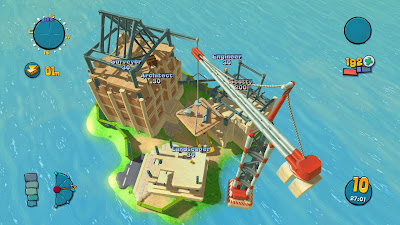 As a long time fan of the Worms franchise I’ve always had a soft spot for those cute, cuddly little murder-machines. In recent years, Team 17, the game’s developer, has done little to add to the experience other than porting older iterations newer platforms. Worms: Ultimate Mayhem is no exception. It’s a fan-service for gamers like me who eat it up but it’s still the same experience in similar wrappings.

Everything that you will love and hate about Worms is still there. The always surprisingly deep strategic elements which are somewhat hampered by poor camera control in this 3D iteration of Worms. The horrible AI which can always be replaced by a friend or an anonymous stranger. The silly humour which holds up for a little while if you haven’t played a Worms game recently, but could use a bit of variety.

In my mind, one of the true strengths of Worms has always been the local multiplayer. The ways you can mess with your opponents are made even more enjoyable when you can get direct feedback from them. The weapons are so silly and sometimes so outrageously powerful that it creates a fun dynamic when at any time you can pick up a crate containing a weapon that can completely turn around the game. This game is no different. The formula still works but is severely hampered by the fact that the bad camera is just as likely to mess up your game as a generous weapon drop delivered to your friends doorstep. 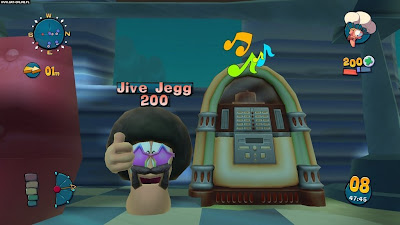 When it comes to playing the game on your own, the game offers a fairly long campaign with a surprising amount of variety to the missions. Some pit you against a whole team of foes with only one worm to do the job and there is a certain type of fun to be had trying to figure out a plan to survive and take out the enemy. The strategy is deep enough to keep things interesting for a while but it doesn’t hook you like it ought to.

The single player content is abundant and certainly has enough legs to last you for quite a while if you really like the game. A tutorial, a long campaign and some challenges. The problem is that it gets repetitive after a while and there is a finite amount of fun to be had when playing against a shitty AI.

The formula works but the presentation feels like a re-hash of old Worms games. I’m still waiting for something from Team 17 that makes Worms interesting again. This feels like a PS2 game in a higher resolution and looks like it too. I’m usually not very focused on the graphics in a game but it can take you out of the experience when done poorly.

Worms: Ultimate Mayhem could use some polish but it’s not a bad game. If you are into silly humour and have an appetite for some cartoonish mayhem it might be worth a go. Worms veteran will be familiar with and possibly like but there is a lot left to wanted out of this experience.