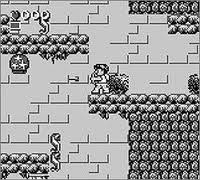 Smart marketing move by Nintendo: Just as it looks to revive one of its more niche characters for a full-fledged 3DS outing, it releases one of the classics on the 3DS eShop to get people interested. And interested they should be if the quality of Kid Icarus: Of Myth and Monsters is anything to go by. This is a great little game.

This is hardcore platforming at its finest. Rather than being a sidescrolling experience like the classic Mario games, this is a game where the direction you generally want to be heading is upwards (therein bringing in the mythology of Icarus and his journey into the heavens). Enemies can (and do) come in every direction, and often the platforms Pit is jumping from – and to – are tiny. He has his trusty bow to protect himself with naturally, but he’s also a bit of a glass cannon; just a few hits and it’s the end of a life for Pit. With extra lives fairly hard to come by, this is a game that should challenge most gamers.

It’s also a surprisingly deep and large game. Levels are quite open, and filled with nooks and crannies to explore, so while the game is relentlessly linear in its level structure, you’ll never feel too stifled by the action. There’s rooms full of treasure, often tantalisingly just out of reach, and occasionally you’ll stumble across a room that is not only treasure-free, but full of nasty enemies.

Pit controls quite nicely, thought the physics engine is predictably old school. The swarms of enemies do tend to follow set patterns, so progress through the game can at times feel more like an exercise in memorisation than genuine skill, but this is nothing that wasn’t on par for the time.

What is really impressive is the variety this game offers. There’s stuff to buy, objects to collect and plenty of levels to traverse. The lion’s share of Game Boy games, especially the platformers, were short experiences, so to have this game last more than a few hours (given you’re likely to want to replay it to finds more of its secrets) is a nice change.

And finally, it looks and sounds the part. While obviously limited by the Game Boy’s processor, Kid Icarus does a good job of evoking Greek mythology in its settings and soundtrack.

It’s rather surprisingly that Nintendo has taken so long to revive Pit and his heroics, because Kid Icarus was a very good franchise. If you needed anything to inspire you for the release of Kid Icarus: Uprising, give this a whirl.

Mojang allowed to use ‘Scrolls’ name

Go behind the scenes on Modern Warfare 3 DLC