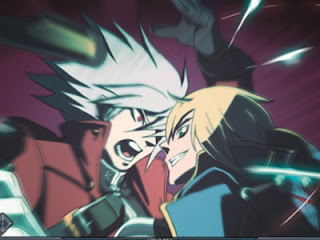 When it comes to 2D fighters I’m an absolute dunce. I have no problems admitting this; I suck at these games and because I suck at them, I very rarely play them. I haven’t played a Street Fighter game in some 10 years and my tastes very much lie in the more straightforward 3D fighters such as Dead or Alive.

So, BlazBlue: Continuum Shift Extend intimidated the hell out of me. When I first loaded the game, I was presented with a menu with 16(!) different options for game modes and the like. That was intimidating. Having never played a BlazBlue game before I got into the tutorial and immediately I was put in my place by a character that took every opportunity to demean me.

I would later figure out that that was just the personality of the character giving the tutorial, but the point is that this game is by far the most unwelcoming game for newcomers that I have ever seen.

Which is unfortunate. I hope other newcomers are able to push through that initial bout of intimidation as I was, because BlazBlue is freaking incredible. It’s a wildly entertaining fighter with real personality and spirit. 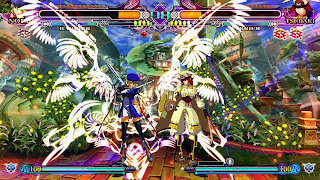 To start with those gameplay modes: every single one of them brings something new to the table. There’s around 10 different ways to play (the other options on the main menu are taken up by settings and the like) ranging from the straightforward arcade game, to the hardest of hardcore modes; a 666-level dungeon that will really, really test the abilities of the best of gamers.

Despite those more hardcore game options, the reality is that this game does have the capacity to be forgiving to the newbies inside some of the gameplay modes. I was able to get my way through the easiest difficulty level after just my first attempt. It was then that the combat system began to reveal itself to be very nuanced, despite its speed. And when I realised that, I really fell in love with the game.

Button mashing will get you nowhere in this game, even on the low difficulty levels. This is a game of carefully-considered blocks, deflections and counterattacks. It just happens to be way over the top in the process. The fireworks are defiantly there in this game with the big specials, and they’re often quite silly. The game doesn’t take itself too seriously, which helps get it through some of its more irritating quirks. The main one being that it’s possible to get caught up against a wall, and jiggled to death. There are points where it’s almost impossible to do anything but watch as you get caught in a endless stream of attacks that knock your character into the air, keeping him/ her there and generally unable to block. 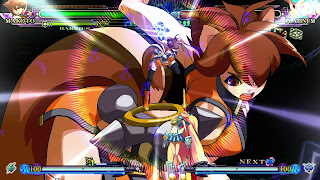 Of course, it’s possible to do that to the opponent as well, at which point it becomes an exploit rather than a frustration, but that is one of the reasons I rarely play these kinds of fighting games. Perhaps it’s just because I suck at them, but I don’t like watching three quarters of my health bar ripped from me without being able to respond.

The presentation of this game is almost unparalleled. The backgrounds are slick and complex 3D creations, full of colour and personality. The characters are supremely well-animated 2D sprites. Perhaps not quite as slick as Rayman, but definitely up there. Each character has its own animated personality too, which helps define them, as their background stories are one-note, even by fighting game standards. There’s perhaps not as many characters as I expected for a fighting game, but I found my favourites quite quickly and importantly; each of those characters has a distinctive fighting style. Some are able to do double or even tripple jumps. Others are stronger on the ground. Some are better at range, and others excell in close combat. While I’m obviously no expert on the genre I found the character variances greater than some of the other games I have played and this made for a more tactical fighter ultimately – it’s as important to understand your opponent’s capabilities as your own.

It’s also worth noting that the music is superb, and were I able to find this as a CD soundtrack, I would buy it in a heartbeat.

A special call-out to the Vita hardware too, which is superb for fighting games. I was comfortable with Dead or Alive on the Nintendo 3DS but by comparison I’m in heaven with the Vita’s comfortable D-pad and button layout. It’s a touch difficult to pull of those half circle attacks, but again that’s more likely down to my own lack of ability than the game or the hardware.

BlazBlue is like an angry kitten, really. It’s adorable and it wants you to think it’s tough, but it’s rather sweet under the bristling and little growls. The hardcore gamers will get right into the online play and the higher difficulty levels (and no, I wasn’t brave enough to try the online play). The more casual 2D fighting games will be able to sit back and appreciate the depth and intelligence of this one.