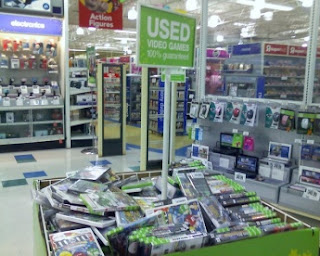 The rumour is that the yet-to-be-formally-announced PlayStation 4 will not allow the playback of second hand games. As controversial as this view is going to be: I’m proud of Sony for taking a stand.

Before I get into why, I’ll just clarify: I don’t believe this is necessarily a smart thing for Sony to do in terms of any aspirations it had to claw back some market share. This is going to royally piss off a number of consumers. There will be some who will refuse to buy the console as a result of this, at least in the early days.

But I don’t necessarily think that’s a bad thing either. The key here is whether Sony can ensure that enough people still buy the PS4 to compensate for those that don’t. And it may well be. There are numerous business advantages this strategy would have that would mean it could get away with being in less homes.

Let me explain: By protecting the publishers, Sony can do two things: 1) it can charge higher licensing fees to publish on to the PS4 because, without the used games hanging over the publisher’s head like the Sword of Damocles, they can more accurately forecast sales of their games, and the proportion of games sold: total user base will be higher. 2) Pricing will be more protected. Again, without the second hand market, the downward pressure on retail pricing will be less, meaning everyone stays profitable longer.

If publishers are happy with a console – and a profitable publisher is a happy publisher – it is going to be more likely to produce exclusives for a console. With exclusives, people will be encouraged to buy a console even if they have some issues with it, and therefore I don’t believe, long term, the lack of second hand games will cause all that many lost PS4 sales.

I also suspect that Sony will approach the PS4 like it has the Vita. That is, that the digital download sales via the PSN will be more important than the boxed sales at retail. Again, while a small group of consumers get upset at this, if the publishers are happy, profitable, and producing more (and better) games, the majority of consumers will win out.

So I’m not worried about losing the second hand games on my PS4, since it means the new games I get will be better quality and there will be more exclusives. As someone who downloads most of my games anyway, I’ve already made that mental transition anyway. It’ll be interesting to see if this feature is confirmed by Sony, and just how many PS4 sales it will cost it.

GIFT launches with some novel DLC