What is the world coming to? The new digital novel GIFT has been released along side a promotional Minecraft level featuring settings from the spooky tale.

It’s a pretty interesting idea and one that actually makes a lot of sense. Instead of releasing a full fledged game based on the new Open Road published game, the world of Andrea Buchanan’s (The Daring Book for Girls) GIFT comes to life as a one shot level for an insanely popular title. Not only does the book get a ‘game’ this way (because it probably wouldn’t have otherwise) but it gets waaaaaaay more exposure since we’re talking about a title in Minecraft that millions play pretty regularly. 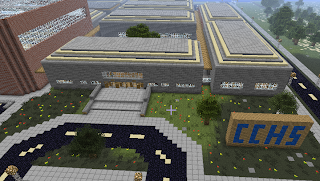 As far as what you can expect, the map was built by designer du jour ‘Vechs’ and showcases three distinctly different locations from the ebook:

Players navigate through both the geography of where the book takes place and the imagined world of the ghost story within. Just like the novel, the map features three main areas: a Southern California town where the characters live, the dreamworld and the ghostly underworld. While anyone can enjoy playing through the map,if a player has read the book, he or she will recognize the settings and might even be able to use some of this knowledge to get ahead.

So other than the runaway level of popularity that MC has, why choose the building game for a crossover?

“As an avid Minecraft player myself, I wanted to devise a map that would be both challenging and fun to explore,” Buchanan said of her independent project. “The map’s three different worlds add a layer of complexity, while its thematic connection to the book gives it an exciting twist.”

Both the GIFT book and Minecraft level are available right now for download here and here, respectively.