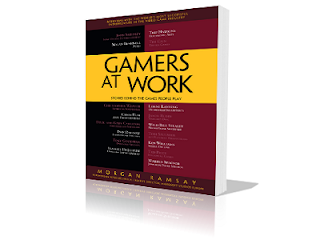 I’m a pretty busy person, so to find myself pushing everything on my “to do” list to read a book from cover to cover in a night is something quite rare.

And that’s exactly what I did with Gamers At Work. It inspired me, it fascinated me and it enlightened me. Morgan Ramsay, has adopted a very basic question and answer interview structure for his book – one interview with one person per chapter – and in doing so has allowed nearly 20 real industry veterans with some amazing stories to let loose about what it’s like to start up and grow a games business, and in turn how things can go very, very wrong.

And those stories are often inspirational. We’re talking about how people like Warren Spector, Trip Hawkins and Nolan Bushnell build some of the most influential businesses in the gaming industry. Ramsay has interviewed a deep cross section of the American industry and the people he has interviewed are often very candid about both the successes and failures. In doing so, it’s enlightening. As an industry that is so focused on product and the end-user experience, it’s rare to get an insight into how people monetise the game making process, and you quickly learn that games development and startups share many common concerns as their enterprise counterparts.

We never see how the negotiation process works with Microsoft, for instance. As gamers, we often simply sit there and just assume it’s a couple of meetings in a comfortable board room. But through this book you’ll learn how Tony Goodman and Ensemble actually managed it, and why it can take months, not days. And then you’ll realise quickly that making a business out of making games is nowhere near as easy as we’d all like to imagine. I’m as guilty as anyone of being an armchair expert and I would recommend this book to anyone about to comment on an Internet forum or discussion to criticise the way a games business works; chances are it’s not as straightforward as you think.

The stories also make for some essential reading for people looking to get involved in this industry. Simply having a great idea or programming skills isn’t going to be enough; indeed, many of the people interviewed here did not come from technical or creative backgrounds. Gamers At Work reinforces the fact that just like every other business sector the games industry is a sales-driven industry, and if you’re starting up your own development studio, you’re going to want a marketing or sales person as your CEO, just as you’re going to want the head of games development to be a game developer. That might sound logical, even flippant, but again it’s something we gamers often take for granted. And then the realisation hits that without these business people with great sales ideas working things in the background, people like Sid Meier would never have created Civilization.

There are a few small weaknesses with the book, though they don’t detract from the quality of what is in the book. It’s heavily weighted towards industry veterans and those who have set up big businesses. It would have been great to have a look into turning an indie project into a commercial success with an interview with Mojang, for instance. It’s also slightly redundant already, as there isn’t a mention of Kickstarter in the book (that opens the door for a second edition, we think). Those interviewed are also entirely pulled from the American development business. It would have been interest to contrast with how Goichi Suda has built Grasshopper Manufacture, for instance. I know there would be plenty of Japanese veterans interested in talking through their processes, so perhaps this is being held for a sequel.

And while Ramsay clearly understood the questions to ask to get these industry veterans talking, I think the book could have used a bit more editing. There’s a little too much redundancy built in when every interview kicks off with a “how did you get started in the industry?” While that’s a logical starting place, dedicating a page to it each time was frustrating when I just wanted to get to the good stuff.

Overall, though, this is an amazing book, and inspirational enough that I walked away determined to start my own game development studio. Anyone interested?

Five reasons an Elder Scrolls MMO is a terrible idea