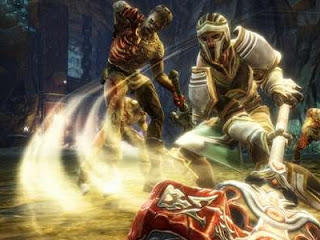 Without a doubt, Kingdoms of Amalur: Reckoning is the most disappointing game I’ve ever played. As you’ll see from the score below, it’s not a bad game by any means. It’s just that it is the dictionary definition of disappointing.

When I first heard about this game, however long ago it was, the first thing that the marketing team behind this game made sure we knew was that it was being led by a trio of fantasy genre elite: The dude that drew Spawn into existence, the dude that came up with one of the most popular fantasy characters ever (Drizzt Do ‘Urden, go read the novels if you haven’t), and the dude that directed Morrowind, the greatest western RPG ever.

So, when I got to playing the game, I could see the collective genius ticking along behind it. The plot kicks off with an exciting twist on the JRPG convention of having the hero start his/ her adventure in a bed. Here you’re dead, and somehow come to life. Early conversations immediately have you intrigued in finding out more, thanks to some wonderful, intelligent dialogue. Thanks for that, R. A. Salvatore. 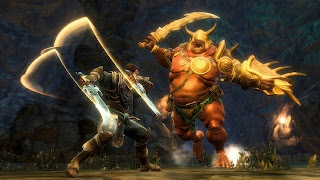 Then comes the tutorial dungeon, and immediately you’re introduced to a world that looks a bit like an MMO, but better. As bright and vivid as the colours are, there’s a real sense of darkness and menace to the visual style. Which is, incidentally how the best comics work, so thanks for that Todd McFarlane. Characters are universally interesting and it’s nice to finally be able to play a hero who isn’t entirely ugly (yes, I’m looking at you Dragon Age and Skyrim). Every new environment is capable of throwing new wonders at you, and there are times where you will just want to sit back and admire the scenery.

Then comes the combat and skill trees. Right off the bat, the combat succeeds in being nuanced and customisable. Whether you want to play a magician, and brutal warrior or a lithe rogue, the game enables you on that, and a deep skill tree promises a world of customisation. 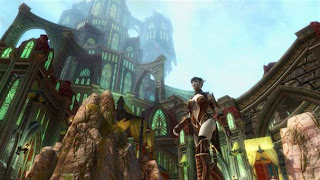 After the introductory dungeon, I wandered down a path (there was water nearby, but my hero couldn’t swim, so I was forced down this path, what the heck Ken Rolson?) and quickly hit the first village. There Rolson’s influence really hit home. This town was almost a carbon copy of the opening village of Morrowind, right down to the style of subquests and its branching structure – as you complete existing subquests new, related ones open up to you, but the town is so small that that doesn’t feel overwhelmed either.

The problem is that right at that point, you realise that these three visionaries have all failed somewhat in the overall package, and it sets the tone for Amalur to be a game of simultaneous brilliance and disappointment. With that wonderful dialogue, if you progress conversations in an alternative order to the default, then the NPCs will give you the information in the wrong order. A number of times I was told a “good” guy was a “bad” guy before the game had been designed for me to find that out thanks to these dialogue trees. Further, there’s a lot of repetition of important facts through the dialogue system; it’s as though Salvatore was worried people might miss some of his clever ideas. It’s actually worse than how the dialogue works in Skyrim; the overall plot is so gorgeous that it’s easy to forgive these individual moments but there’s some massive breaches in the suspension of disbelief here that really hurts the game’s credentials as an immersive RPG. 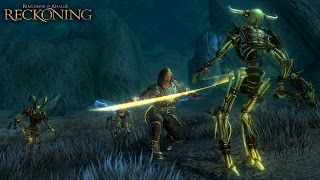 McFarlane’s failure is in visualising a world that is far, far too complex for console hardware, and you’ll need a hell of a PC to even get a sense of what he was aiming for. Textures pop in just a few steps away from the player character. Looking at a distanced further than that is a generic mess of PlayStation 2-style 3D visuals. So those few metres are stunning, with highly detailed textures and colours. The rest is uninteresting splotches of indistinct colour.

Rolson doesn’t escape criticism either. He’s envisioned a big world, but a world of corridors. The massive open plains of Skyrim are almost non-existent. The room to deviate from the beautifully cobbled pathways is limited. There’s a lot of sidequests, but they’re almost always glorified fetch quests, and I’d argue they’re anything but “sidequests” – a slow levelling system means you’re going to have to complete a lot of them if you want to make it through the more difficult stuff later in the game. 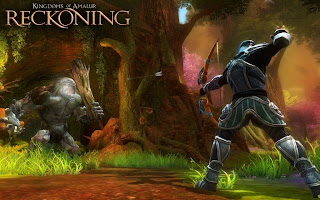 The character moves at a rapid pace, which means any impression of distance between locations is almost non-existent. The Elder Scrolls games have always done a good job of keeping character movement slow to make the distance between cities and teams somewhat believable. Amalur feels more like a caricature where each new location or experience is just a few seconds away. More exciting for some, less of an open world for others.

The combat, too, creaks under the strain of ambition in the longer term. It likes to present players options, but then demand they use just a few of them to solve every combat puzzle. It then tries to make the puzzles more challenging by preventing the use of the more interesting strategies. See an enemy in the far distance? If the bow auto aim can’t reach him, then you can’t snipe him down. If you’ve decided to play a sneaky rogue, you’re going to encounter far too many instances where the enemy sees you before you can pull off a stealth kill, and even if you achieve that, enemies tend to come in swarms, and taking down one immediately reveals you to all the others. There’s also no reward whatsoever for avoiding combat, so martial classes tend to dominate (magic users suffer from a significant casting time in a game this fast). 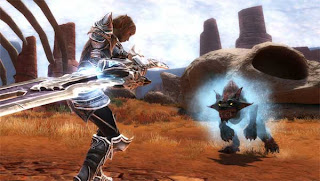 Amalur has also adopted a few traits from the world of MMOs that do more harm than good. There’s no need to buy ammunition – you’ve got unlimited arrows which is balanced by only having a handful of shots before you need to wait a moment for the imaginary quiver to reset. Switching between weapons is automatic, with no downtime. When you’ve got a game that is plotted by R.A. Salvatore, “believable” fantasy is what you should be aiming for. Superhero fantasy doesn’t gel that well with the deeper story within the game.

Not a single one of these criticisms makes for a bad game. Amalur is still the product of three visionaries. But it’s not a visionary work itself. It’s a highly entertaining and enjoyable RPG. For these three, that’s just not good enough.