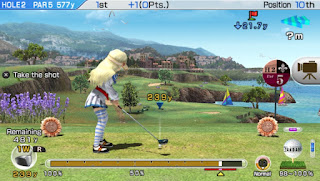 It seems to be a constant; another Sony gaming device, another Hot Shots Golf game. As such, it would be all too easy to ignore the first golf game on the Vita, but you’ll be kicking yourself if you pass up the latest sequel. World Invitational offers more bang “fore” your buck than prior instalments, with charming characters and visuals to boot.
It’s hard to expect all that from the basic game of golf, but Hot Shots pulls you in with its simple charm before drowning you in the multifarious details of the sport. After picking the character of your preference and your choice of ball and club, it’s time to swing for the fences.
The first few courses ease you in with simple design that any amateur can complete without much golf knowledge. It’s just the basic process of aiming, selecting your power, and putting on the green. Over the long haul, though, this game gets fiendishly difficult and borderline frustrating. You need to take into account a number of different factors for every single swing you make, namely wind, spin, where the ball will roll, and bunker locations. If you botch just one course in the higher league tournaments, you’re all but finished. 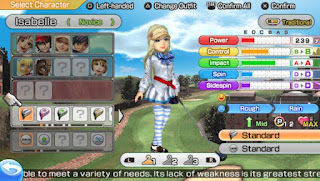 And yet, the challenge in World Invitational feels warranted and any failure is always because you overlooked something. The game gives you a variety of ways to take into account the variables, such as an overhead view of obstacles, number statistics, the “flow” of the green, and the wind direction. If you’re really stuck, you can flick on easy mode to make your opponents play poorly or grind for money by replaying older courses. That way you can afford better equipment or a new character that better suits the testing course up ahead.
Characters can also be visually customized to your liking. It’s actually quite engaging to dress up your golfer and this helps add your own flavour to them in lieu of the lack of a full-fledged creation system. You can even customize the lobby character, which then serves as your online avatar when exploring the e-hub.
I mentioned this earlier, but World Invitational is absolutely dripping with content. The game contains a points system that rewards players with cash to spend at the shop. From there, you can buy new characters, courses, golf clubs, costumes, music tracks, and more. Nearly everything is locked from the get-go, so that leaves at least a hundred items of various prices to be obtained.
On top of that, you’ll want to obtain a perfect crown on each of the Challenge Mode levels so you can unlock even more tourneys. Doing this is no easy feat – many require you to have near-flawless playing for nine to eighteen consecutive courses. If you want to perfect the game, you can expect to be playing six months from now. When you do master it, there’s even a mode that removes the ability to view the statistics so as to entirely immerse you in the game of golf.
World Invitational is reasonably friendly in terms of the ability to pick up and play, but a mid-tourney save function would have been rather welcome. At least you can suspend the game via the Vita itself, but it’s a bit inconvenient. 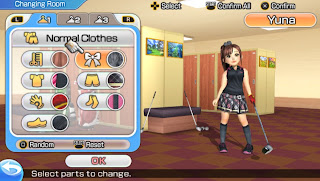 Strangely enough, there are more than a few songs that comprise the soundtrack, despite this being the quiet sport of golf. Many of them are bland filler or uninspired, but now and then you’ll stumble across a fine tune. The sounds too are pleasant; at least until you hear the caddies speak. The voices of caddies tend be rather grating, albeit still tolerable. I feel it would have been more effective to use the voices of the characters themselves and only when it’s a reaction to your performance.
Fancy visuals were equally as unnecessary as the music, but boy do they look good here. The cartoony style of the characters is the source of personality in the series, and World Invitational is no exception, but it takes this further than the PSP entry by making the world itself seem that much richer.
I’m not exaggerating when I say Hot Shots Golf: World Invitational is the best golf game I’ve ever played. If you only pick up one launch title, this is the perfect candidate thanks to the sheer amount depth, content, and replay value.
-Clark A