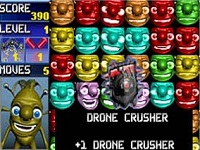 Crazy Cheebo: Puzzle Party arrived on the DSiWare scene midway through last year. Springing up as yet another Match 3 Puzzle game on the system, Cypronia’s title faces stiff competition from titles such as “A Little Bit Of… Puzzle League” and “Puzzle Quest: Challenge of the Warlords” and unfortunately, it simply doesn’t stand up well against its challengers.

The story is explained through a brief CGI introduction video at the start of the game, which shows an alien known as Crazy Cheebo who gets attacked by a giant robot called the Drone, which then follows Crazy Cheebo, who proceeds to hide amongst a large group of other aliens. After that, the game begins

The game doesn’t diverge too much from your standard Match 3 Puzzle games. Set on a 6×6 board, the aim is simply to match up 3 or more aliens of the same colour within the level’s move time limit and if you take too long to make a move, one alien will become locked in place. The amount of time given to you decreases as you advance through levels so you have to be quick in later stages. Aliens don’t simply have to be moved to a space right next to them, they can be moved across to the other side of the stage if necessary, which is quite handy at times. 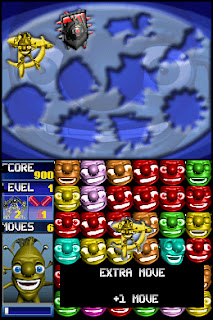 You’ll also be punished for making an illegal move, one which doesn’t link up an alien to two other similarly coloured aliens. You’re given a certain amount of “spare” moves in case this event happens, although it’s game over as soon as you run out of them. You can also get additional bonuses such as extra moves depending on a variety of factors, such as whether you managed to link up two different sets of aliens in one move.

There is a multiplayer option available so you can play against with a friend but there is no download play option available for this, both players need to have the game downloaded onto their individual console, which is annoying. While there is some fun to be had here, it’s best played in small doses as outside the high score boards featured, there’s little to keep you coming back here as the game is notably lacking in depth and gets repetitive quickly.

Graphically, the game is not exactly the prettiest offering to be had in the DSiWare selections but it has an interesting sort of style which goes well with the game and the use of full 3D CGI video on such a small title is impressive. Soundtrack-wise, there’s not much here outside of some generic techno-based tunes, which aren’t much to write home about

Overall, Crazy Cheebo: Puzzle Party is not the best of Puzzle games available for DSiWare. While it can be fun in small doses and comes at the bargain price tag of 200 points, there’s very little substance to the game and unfortunately, it’s one which will struggle to keep your attention for very long.