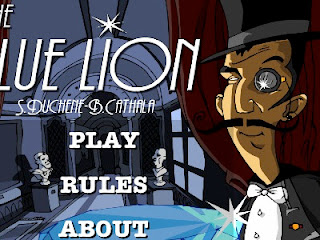 There’s not a lot to say about Blue Lion really. Based on the board game of the same name, the game takes place in the famous Paris museum The Louvre, where a famous diamond exhibition is currently taking place and among them is the Blue Lion, a diamond of unique purity and colour and as such, has become a target of jewel thieves worldwide. Unlike the diamond it’s named after however, this is not one game which sparkles above all others.

You play as one of two jewel thieves, Arsene or Lady X, and you’ll go up against whichever thief you don’t choose, which can either be an AI opponent of either easy or normal difficulty or another player. Your aim is simply to beat the other thief by obtaining seven victory points, which is done using a set of six different tiles. These range from Arsene, Lady X, a police officer and diamonds but they all can be flipped over to another side and you take turns to align them across the board. 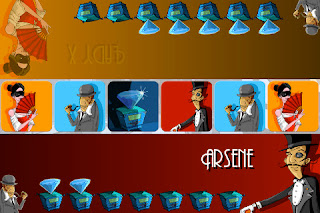 In order to win, you have to align these tiles into specific combinations. For example, If you are able to line up three diamond cards in a row, you’ll earn three victory points. If you manage to get a diamond between two cards of Arsene or Lady X, you’ll earn two points and if you manage to report a character to the police by surrounding them with two police officer cards, you’ll earn one point.

Unfortunately, it’s not as simple as just being able to place the cards anywhere on the board as your movements are somewhat restricted. You have to either place the tile from one end of the line to the other, turn over the tile or exchange two adjourning tiles. While this isn’t a bad game by any means and can be quite fun with friends or in small bursts, it’s biggest issue is that the game is lacking in content, with only that one main mode to keep people occupied. On top of that, what is on offer here is not particularly exciting and won’t keep drawing you back for more. 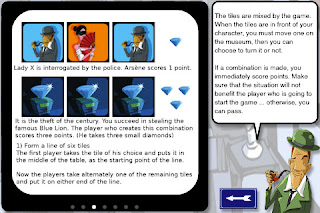 Overall, Blue Lion is not the greatest of games on the App Store. While it’s a decent adaptation of the board game and quite fun when playing someone else, it’s biggest problem is that there’s just not enough content on offer and what is here can be gone through in five minutes. As such, it is difficult game to recommend this game over other iOS titles.

Review: Who Wants To Be A Millionaire? Special Editions + DLC (Xbox 360)