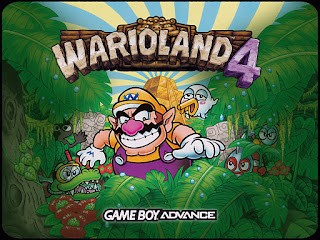 These days, Wario spends most of his time cooking up get-rich-quick schemes in the Wario Ware series. It’s easy to forget that Mario’s warped doppelganger has given birth to some of the finest portable platformers in years. Wario Land 4 isn’t the best example of his platforming superiority, but it’s still a well-rounded title that warrants envious glares from non-ambassadors.
The game begins with a brief cutscene that explains Wario’s greed, but story isn’t the point here. Rather, the fact that he’s headed to a golden pyramid to ransack goodies galore is.
After completing a tutorial, the game gives you free reign to pick the passages of the pyramid you want to explore, which is basically a stage selector. You still need to beat a level to unlock the next one in a passage, but you can leave any time and change passages all you like. Each section contains four levels and a boss fight at the end.
Each stage begins as a pleasant romp through the world of your choice. Wario is free to explore a level as he sees fit, but he will need to find four fragments of a hexagonal jewel as well as a floating key if he wants to make it to the next level. To make things more interesting, Wario comes equipped with several abilities such as the ability to dash through blocks, and utilise enemy-based transformations. Some of these transformations are beneficial, such as “fire Wario” who can break down icy blocks, but others simply slow you down. Overall, though, Wario’s abilities play a crucial part in your exploration and making use of them is a necessity if you want to make any progress at all. 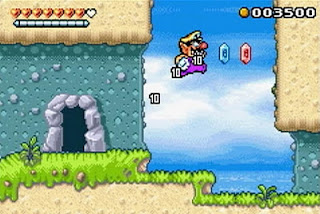 Once you’ve pillaged the village to your heart’s content, you’ll have to go to the end of the level and stomp on a frog’s head to escape. Here’s the swerve though – now you must escape the level…with a time limit! Even if the times given are rather generous, there’s a certain intensity that comes with running out of the level in a mad rush. To spruce things up further, there are certain treasure items that can only be obtained after you’ve triggered the countdown clock. Do you escape with your treasure and regret having to make a second trip or gamble and put everything you’ve collected on the line? The only quibble here is that mandatory items can sometimes only be found in the escape phase, which makes it difficult to determine whether or not it’s time to jump on the frog.
So, what can Wario do with all that “borrowed” cash and treasure from his raids the golden pyramid? He uses it to play three basic and thoroughly uninspired mini-games. Assembling Wario’s face, hitting baseballs, and jumping cactuses rewards you with coins. Those coins can then be spent on items that weaken bosses for fights. It’s a strange system that rewards you not for collecting treasure, but for being good at the mini-games. On top of that, the bosses tend to be easy enough that these items are superfluous and anyone who can’t beat them probably isn’t skilled enough to make it through the levels anyway.
Despite having loads of treasure, the amount of content in Wario’s game leaves something to be desired. It’s true that a platformer doesn’t need to be a lengthy experience, but it still feels somewhat dissatisfying when the game can be completed 100% in only a handful of hours. 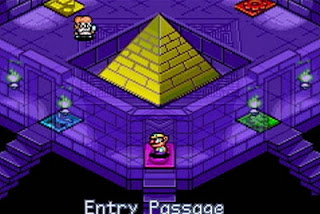 Wario Land 4 happens to be thoroughly accessible, thanks to multiple difficulty levels and fairly passive enemies. There are no endless pits to fall into, so you’re never in jeopardy of losing everything because of one false step. Unlike earlier Wario Land games, though, Wario can actually be defeated. This means you can’t be completely careless and that the emphasis is placed more on platforming that puzzle solving.
Throughout the 17 or so courses, you’re sure to hear many memorable tunes, including some vocalised ones. Early Game Boy Advance quality sound combined with often Japanese lyrics makes them difficult to understand, but these songs were never meant to set the charts on fire. The visuals hold up rather well, and the stretching on 3DS seems to have a minimal impact.
Wario Land 4 may be full of quirks, but the lot of them combined aren’t able to drag down the value of the overall package. It’s not Wario’s finest outing, but should non-ambassadors get a shot at this one, it would still be worth paying a premium price for.
-Clark A

Race Across PC, Android, and iOS with Ricky Carmichael