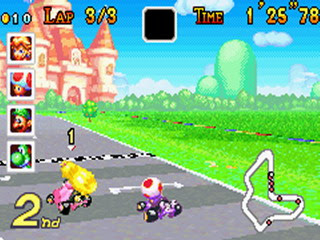 Everyone has played a Mario Kart game at some stage. They’ve been around since the SNES with the original, and brilliant, Super Mario Kart. So, rather than review the free (for ambassadors) Mario Kart Super Circuit; the second most “primitive” Mario Kart after the SNES original, I’ll use this “review” to compare the game to the recent, and most modern, Mario Kart 7.

In short, after downing too many hours in the last few weeks into both, I prefer Mario Kart Super Circuit. There’s something about the early Mario Kart games that combine gameplay balance and superior track design that the later games lack. In short, Super Circuit is an inspired game, where Mario Kart 7 plays it far too safe.

It starts with the infamous Mario Kart items. Where a typical Mario Kart 7 race will see you hit (on a regular basis) by red shells, blue shells, lightning bolts and dodging invincibility stars and other very powerful nasties, Super Circuit only has just one item pickup place on most tracks, and the impact of those items is minimal; the shells are relatively easy to dodge. There’s no blue shell; the real bane of later Mario Kart games, and lightning bolts and the like are mercifully rare. Super Circuit most definitely does not suffer from the plague that Mario Kart 7 (and Mario Kart Wii before it faces), where the last thing you want to do is be racing in first, because that position is a happy hunting ground for everyone behind you. 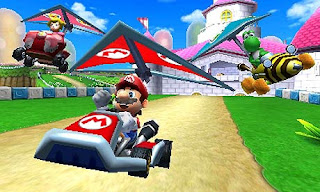 But beyond that, what I prefer about Super Circuit is the handling itself. There’s a twitchiness to it that rewards perseverance and skill, rather than the Mario Kart 7 style of gentle hand-holding. Mario Kart 7 features easy turning curves and an equally easy to execute boost system that makes power sliding a mere process rather than something to be mastered; even for the less skillful players. Super Circuit on the other hand has specific turning curves that take time to master, and getting that vital boost coming out of a power slide takes some practice.

Because the turning is so twitchy, the Super Circuit tracks themselves are simple in design, but unforgiving. They’re expertly designed out of simple twists and turns to test a player’s driving ability, and while that does lack variety compared to the kaleidoscopes of events that construct the newer Mario Kart tracks, those tracks themselves are not there to  test driving ability. I never felt that the glider and underwater gimmicks of Mario Kart 7 was necessary, and the sheer fun of speeding through basic left and right turns with precision confirmed this for me.

So Super Circuit is the more “pure” racing game, which is just as well, because it lacks any kind of multiplayer to turn it into the party game that later Mario Karts have adopted as their mantra. Without multiplayer, the game excels in testing your own ability in the time trial mode. There’s a lot more tracks in this game than in most Mario Kart titles – it’s possible to unlock the entire set of the SNES classic tracks to go with the 20 “new” tracks, so there’s plenty of value in this game even without the multiplayer.

Mario Kart is a series that has been honed to a fine art in terms of party game entertainment value, but going back to the early games, I prefer the relative lack of refinement. There’s just too much busywork that goes into modern Mario Kart games that detract from the actual racing. Super Circuit, then, is one of the best games in this iconic series.