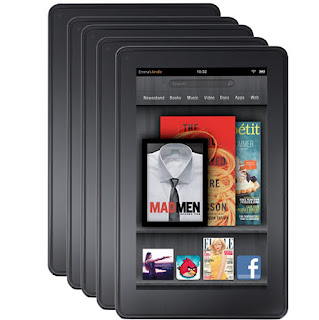 So the Kindle Fire is at the moment only available for Aussies with friends overseas or who don’t mind getting an imported one. I was lucky enough to have a girlfriend with relatives in the USA who brought me one over for Christmas.

The Fire offers everything that the previous Kindle’s offered as an e-book reader and so much more. It comes with integration into the entire Amazon store, you can now purchase music, movies, tv shows, apps, newspapers, magazines and books all to your new Kindle Fire. The straight-forwardness of the layout shows that it is made for maximum user friendliness. Unfortunately at this point Australian users can only access the book stores available to all Kindles. This doesn’t restrict you from putting the TV shows, movies and music directly on there via a USB transfer, however, since the cable isn’t provided it is assumed that Amazon isn’t too keen on this. (A simple micro-USB cable is easy enough to pick-up.)

Once the other downloadable options become available worldwide the Amazon Cloud storage option will really become great. The ability to store your media online and access it anywhere there is wi-fi is extremely useful. It comes with 5GB of Cloud storage to compliment the 8GB of internal storage (although the cloud storage is expandable for an annual fee).

The e-book reader looks great in colour. To test it out I purchased some Sandman comics to see how they looked. The ability to zoom in on each individual panel is great although sometimes flawed due to irregularly shaped or overly large panels. The colours are brilliant although at times the text can be a little hard to read especially when pages don’t fit the screen fully. There is the occasional lag from page to page but not to the point of annoyance.

The device has an internet browser built in which operates on wi-fi only. It would’ve been great to have a 3G option available but this would have considerably raised the purchase price we assume. This brings me to the best part of the Fire: the price.

At $US199 the Fire is considerably cheaper than the iPad and although it isn’t quite as powerful and doesn’t yet have the range of content available, it offers a very similar product. The price signals a bold move by Amazon to create a product available to a far wider range of people than other tablet devices since the construction costs are estimated to be between $150 and $190 meaning that they may even make a loss on the Fire itself. They will hope to offset this with the sales of digital content rather than the device itself.

While you might not get the full use out of the Kindle Fire in Australia just yet the initial signs show that for a fraction of the price of the iPad you can have a versatile tablet product with the backing of the Amazon store. This is definitely something to consider for Australians looking to invest in a tablet in the near future. At this stage an Australian release date has not been announced.

Price-Change-A-Palooza in the week’s PSN update