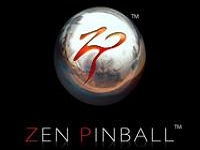 Zen Pinball is an unfortunate case. It’s an essential game that just happened to be released at the same time as the massive marketing push Nintendo has thrown behind the new Mario and Mario Kart games.

As such it’s probably going to be a third placed purchase for most. And as I said, that’s unfortunate, since I personally think this, not the Mario games, that is the best thing that’s happened to the 3DS since Zelda Ocarina of Time.

To start with the obvious – 3D does great things to pinball, a game that by nature needs to provide a good sense of depth and motion for players. Zen Pinball gets the presentation just perfect. The tables are impressively detailed, the ball rolls about the place smoothly, and the 3D is deep indeed. Turning the 3D slider off, in fact, cheapens the experience considerably. 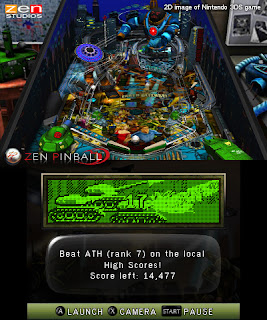 The real complaint in terms of presentation is that at times the tables can seem a little small on the relatively small 3DS screen. Making out the smaller details on the tables can be a real challenge on the eyes, and though there are some alternative camera angles none of them quite manage to resolve this problem.

Longer term, it’s an irrelevant issue though; with a bit of practice the game plays beautifully. Zen Pinball is renowned for its physics on the HD console and the recent iPad game, and the tradition remains strong here. The ball bounces around the table smoothly and accelerates and decelerates precisely as you would expect. There is the very rare moment where the frame rate looks like it’s going to stutter, but it quickly snaps back into silky-smooth action.

There’s four tables within the base download, each with a very different themes – tropical treasure hunt Eldorado, Kings and castles Excalibur, Tribal beats Shaman and B-grade Sci Fi Earth Defence. Each table plays differently enough to the others that each player will develop favourites, but they’re universally well designed tables with plenty to explore and achieve. Zen Pinball also features a handful of achievements for pulling off some spectacular stunts. 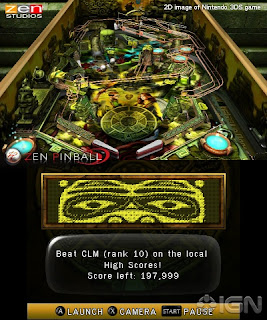 It’s worth noting that these tables aim to be realistic recreations of real pinball. As such there’s very little visual fireworks; rather anything that goes on on these tables would have been possible with the kinds of mechanics that went into the original pinball tables. The attention to detail is spectacular, and you’ll still have a couple of basic minigames to play by setting off certain switches on the table to break up the action; the Excalibur table, for instance, cuts away to a “joust” where you’ll need to time a shot of the ball to unhorse a charging knight.

If that wasn’t enough incentive to keep playing, the real magic to Zen Pinball is the extensive online leaderboards. You’re able to see at a glance your global ranking, your national ranking, your ranking amongst your friends list and your weekly best score.

The game controls beautifully, allowing people to use either the shoulder buttons, or the dpad and B-button, whichever is more comfortable. The on-screen action is very responsive, and the ball moves at a speed that is fast enough to be challenging, but not so fast to turn the game into a twitch-based experience.

We have our fingers crossed that this is one of the games that will benefit from Nintendo’s backflip over DLC. On the other consoles and iPad it’s possible to purchase additional tables for Zen Pinball, including the superb Marvel table. It would add a great deal of longevity to an already great package if it were possible to buy a couple extra tables some time down the track.

For $Aus7.50, the four existing tables are good value though. Pinball is a kind of universal appeal, easy to get into and challenging as only the arcade games of yesteryear could be. Zen Pinball gets everything right, at a price point that is fair, and is one of the best implementations of 3D to date. Even if you’ve already gone out and picked up the two Mario games, it’s worth splashing out that extra $7.50 for this one.