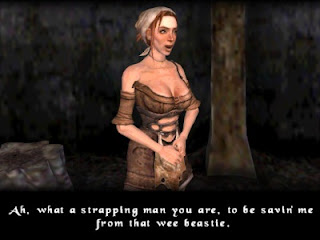 People continue to insist the iPad is only capable of playing casual games. Chances are, though, they’ve never picked an iPad up, let alone played some of the brilliant gaming experiences available on the platform, such as the near-perfect port of PS2 comic RPG, The Bard’s Tale.

The Bard’s Tale is a franchise with a long history, but the most recent attempt to turn it into a mass-market game was this PS2 hack-and-slash game we now have available on the iPad. It was a largely overlooked game when it first hit the shelves, as at the same time the hack-and-slash RPG was enjoying a wave of popularity that included Baldur’s Gate: Dark Alliance and Champions of Norrath. That was unfortunate, because there’s a lot to like about this game.

The most stand out feature is the humour. The Bard’s Tale wastes no opportunity to poke fun at genre cliches, even as it adheres strictly to them. So yes, this is a game where your first task is to descend into the cellars of an inn to slaughter some rats. I won’t spoil the fun, but the developers did a great job of subverting that cliche a little later on, and from that set up, the game is entirely driven by the japes it pokes at itself. It’s refreshing, to say the least, that a game recognizes how fundamentally silly some of the stuff that happens in this genre is. 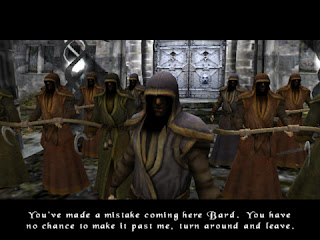 The Bard himself and the people he meets are wholly unlikeable. They’re sarcastic juveniles to the last man and woman, and yet somehow as an overall tapestry they make the game very likable. Playing through the whole thing feels a bit like playing a game of Dungeons and Dragons with teenagers replete with crass jokes and plot holes. And as such, it provides a good time, and just gets better and better the more alcohol you consume (not that I would ever condone the consumption of alcohol, oh no).

The game itself is as standard as hack-and-slash games get. There’s both ranged and melee weaponry, and a button to block an oncoming attack. You’ll be fighting small groups of enemies at a time, and there’s quick access healing buttons if things become too dangerous, as well as the standard regenerating health if you stand around for a while.

Upon leveling up you’ll be presented with the usual options to increase melee or ranged damage, health and charisma (to make buying stuff cheaper). Every so often you’ll also be able to acquire a new special ability to make the fighting just a touch easier. Then it’s back into the field to do a whole lot of killing and looting.

It’s the usual simple minded slaughterfest that was so popular a generation ago, and in many ways it’s refreshing to play a throwback game that doesn’t try and do much else. And, while this is a genre we see a lot of on the iPad, it’s worth noting that at a download size of 1.3GB, the amount of content and the production values are second to none. Everything has (fun) voice acting and there is more personality in the visuals than, say, Gameloft’s Dungeon Hunter games. 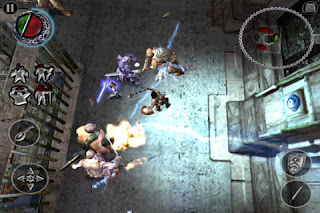 The one point of originality in the game is the summons. Being a bard, the Bard is able to use his music to summon a range of followers and creatures to do the fighting for him, once he’s learned the relevant spell. Some of these have special abilities – the lighting spider for instance, adds lighting damage to its attacks, while a female warrior summon comes packing a crossbow. These summons drain the Bard’s mana, and they have their own health bars that enemies can deplete. Unlocking all the summons spells then using them to get through the tougher challenges the game likes to sometimes throw at you is a great deal of fun.

Ported to the iPad, the game runs beautifully. The frame rate stays up, the visuals remain free of bugs, and the virtual buttons map well on the iPad screen. As the pace of the game itself is reasonably slow, there won’t be many occasions at all where you’ll be fighting with the lack of physical buttons. The only real problem is in rotating the camera, with requires the use of two fingers on the screen, and is nowhere near as intuitive as, say, the second analogue stick on modern controllers. As a result, you won’t be doing any rotation during combat, but thankfully the structure of the game is such that it’s not something you’ll miss.

The other challenge comes from the ranged attacks – the iPad screen dimensions means that you’ll constantly find yourself snipping enemies off-screen. This is easy to do thanks to a great minimap in the top right of the screen, but it’s a little disappointing that there was no way to scroll out a bit further to help visualize the ranged combat.

Those slight foibles aside, this is a great game to have on the iPad, and yet more proof that the device is a genuine contender as a gaming device. This is a near-perfect port of a forgotten PS2 classic.

Join us for some Mario Kart 7?