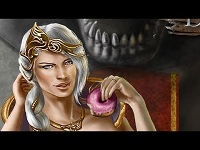 Grotesque Tactics 2: Dungeons & Donuts is a hybrid strategy/RPG title that pokes fun at the very genre it is a part of. I played the first title some, but never finished it. I found the original amusing at times, though the game itself did little to compel me to complete it. That being said, I was still very curious about what the sequel would bring to the table.

There are a few things to consider with a game like this. First, Grotesque Tactics 2 is a budget game. It does not cost as much as many of the RPG titles it pokes fun at, but by the same token its production values are not as high either. I am not going to lie, the game makes a fairly poor first impression. There is very little in the way of introduction, the graphics feel very dated, the interface is not intuitive in the least and there is really nothing in the way of tutorial to ease you into things.

The second item to consider: for a game to successfully poke fun at an entire genre or topic, it helps if it is coming from a position of strength. If you are going to lampoon a mechanic like the nature of fetch quests, then you should find a way to do it better than the average. Sadly, that does not happen here. In fact, in some ways, due to the ingredient gathering nature of the cooking aspect of the game, you do even more and repetitive fetch quests than normal. 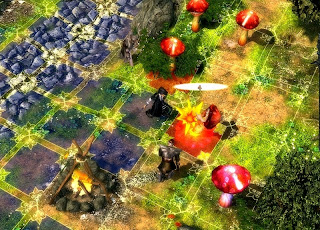 I was already familiar with the first Grotesque Tactics, so I was able to find my way around fairly quickly. I decided to test the interface on my son, who never played the first game but is quite familiar with a wide variety of RPG and strategy titles. It took him quite a while to figure out how to do things like actually save, swing the camera around and to put points into his characters’ talent trees. Some things were not bad, he said. He was able to manage his inventory easily enough. Other things like camera control frustrated him, and I could see where he was coming from. There were times early on where my mouse maybe bumped the edge of the screen, and I was so far off of my character that I had no idea what was going on for a moment.

Luckily, not all is lost here. The combat is brought to you in a turn-based, grid format that actually works pretty well once you get used to it. You also have plenty of quests to do along the way, and you can put points into your talent trees to customize your characters to some degree. One small feature I really liked was the zero hotkey – it allows you to seek out nearby treasure. With the somewhat unimpressive visuals, this was a welcome feature for finding nearby items easily, and kept me from missing items I otherwise would have. Unfortunately there were also times where it just did not pick up on a quest item nearby, and I was left to walk around wondering what I missed, but this was more the exception than the rule and I found the key quite helpful.

One concern however, is the game’s limited depth. Outside of talents, characters are fairly linear in gear they can use and roles they fill with the team. There is a cooking system in place (hence the donuts in the title?), but it is really little more than a glorified fetch quest. You round up items, recipes, and visit a cook to make the food item, which is often part of a quest in and of itself. 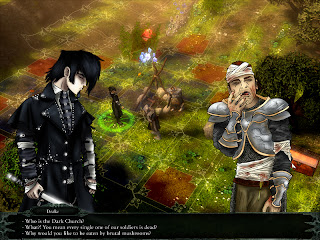 For better or for worse, there is voice acting throughout the game. Most of it is pretty good. I found the lead character’s voice to be appropriately sarcastic during some conversations, but the majority of the time there is a somewhat whiny quality to it that grated on my nerves just a bit. The music is nothing special, but it is pleasant enough not to be a detriment either.

The third point to consider is the humour, which Grotesque Tactics 2 wears on its sleeve. With a game like this, you can guess that the storyline itself is not a selling point. In its place is dripping sarcasm, and like the game itself – some of it works and some of it misses the mark. Hearing the characters poke fun at the silliness of fetch quests, while giving you a fetch quest, seemed odd. One that worked for me? Listening to several characters complain about a character named Hope (a reference to Final Fantasy XIII that does not even qualify as thinly veiled) who whines about the loss of his mother and the failings of Heroes (Oh good. They left Vanille alone – ed.)

There are plenty of colorful characters you will encounter, though some resonated with me better than others. Almost all of them bordered on or crossed the line of ridiculousness, but they infused the dialog with humor on many occasions. Like the game’s overall tone, they are far from perfect, but Grotesque Tactics 2 is generally better for having these wild characters in it.

Despite the fact Grotesque Tactics 2 tries to put a fresh spin on the story with the humor it presents, the game itself is really a lightweight title with limited depth, adequate combat and a very poor interface. It also falls into the exact same traps as the games it pokes fun at as you will grind, perform a ton of fetch quests and make dialog choices that almost never have any impact on the actual storyline. If you were a fan of the first title, then Dungeons & Donuts will likely hold quite a bit of appeal for you. If you are new to the series, you may find the offering to be something of a mixed bag depending on your appreciation of the humor (which overall worked for me) and the combat.

– Nick H runs his own, very excellent, gaming blog, Chalgyr’s Game Room. Make sure you check it out by clicking on this link.