Defend Your Castle is the sad case of a modest little flash game making a questionable transition to a console. While the original was wholesome, brain-dead fun, the WiiWare version is virtually the same, except for the fact that it has a price tag and “differences” rather than worthwhile improvements. No matter how amusing the art may be, it cannot disguise the experience that is primitive by the standards of other arcade games.

The entire goal of the game is to – you guessed it – defend your castle. Each stage, hordes of enemies will assault your castle in an attempt to reduce it to ash. To deal with these pests, you’ll swing your Wii remote over to them, drag them into the air, and then drop them. Once the enemies are too exhausted to continue the battle, you win. You’re given a brief moment to expand your castle’s defenses and fortify the castle’s walls. Once you’re healed and ready to fight, it’s back to war again. 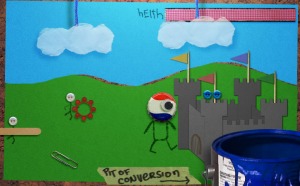 This sounds like an interesting premise, doesn’t it? Unfortunately, it is so feebly executed that the entirely game amounts to little more than wiggling your wrists for a set amount of time while looking at virtually the same thing over and over again. You’ll occasionally activate a spray can here or there, but things feel pretty stagnant. Enemies can be swung in a variety of ways, but if you want to be successful when the armies expand, you’ll just fling randomly until the cows come home. There’s very little incentive to be creative with your kills to begin with. The game also stays true to the arcade style in that it is endless, unless you decide to give up.
The after-battle customization aspect manages to liven up the gameplay to a degree, but it unfortunately cannot mask the shallow gameplay. You can purchase a few upgrades to your castle, such as archers, wizards, and the “pool of conversion”. These upgrades essentially do the same thing: add an item to your arsenal or artificial intelligence to your castle that will take out the enemy for you. Aside from saving you wrist pain, it basically serves as a way to deal with the increasing difficulty. Amusingly, if you manage to upgrade enough, the game basically plays itself!
Perhaps the best feature of the game is the multiplayer mode. If you’ve got three friends willing to frantically twiddle their wrists ad nauseum, it brightens up the experience somewhat. You’re able to overlook all of the shortcomings and simply enjoy the fun that comes with the local multiplayer experience. 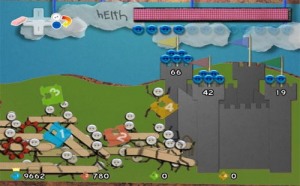 The visuals are unique, to say the least. The game’s world is comprised of buttons, patches, pieces of paper, Scrabble-esque letters, cardboard, and various other random household objects. It comes through that the developers wanted to do something silly and fun to spice up the old game. Sadly, there are no more than five different adversaries for you to contend with. As you might imagine, thwarting hordes of the same enemies while watching a largely static background just isn’t very exciting to look at.
I would like to discuss the music, but unfortunately…there isn’t really any. The only auditory experience consists of hearing your enemies’ moans as they fall to their doom. Since there are only a few enemies and this comprises the entire game, you’re not going to want to keep the sound on for this one.
Bringing Defend Your Castle to the Wii was an interesting concept, but the execution makes it only marginally better than the free flash game. If you want an arcade experience on the Wii, there are many other options that are more polished, fun, diverse, and actually have music. Still, DYC may be worth the investment for a select few, especially if you have friends to play with.
-Clark A.

Reminder: Get Binged on Xbox 360