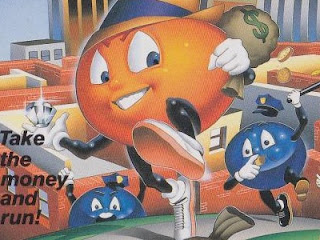 Lock ‘n Chase is a good example of the kind of cheap game experiences that go down well on the Game Boy Virtual Console. As a clone plus more of Pac-Man, this is cheaper than Pac-Man’s Game Boy outing, and manages to be a more interesting core game to boot.

At heart, Lock ‘n Chase is little more than a remix of Pac-Man, but it does generally do things better. There’s a range of mazes (already a step up from Pac-Man’s one maze that repeats over and over). Those mazes are populated by dots, and enemies that move around the maze. The goal is to collect all the dots and running into an enemy takes away a life.

There’s some context to Lock ‘n Chase which does do wonders to separating it from the very abstract Pac-Man, though. Here, you’re robbing banks. The dots are money, the enemies are policemen. The power ups (which either freeze the enemy temporarily, or give the little bank robber the ability to run into enemies for points) are money bags or jewels. Coupled with the cute characters and cheerful music, Lock ‘n Chase is a relatively easy game to relate to. 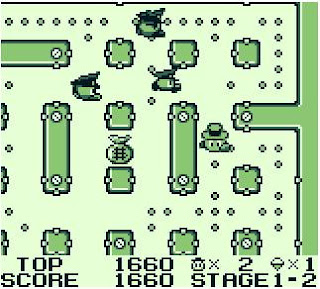 Later mazes become very complex entities, too, with doors that need to be navigated and passageways that become bottlenecks far too easily, meaning you need to do a lot more thinking in Lock ‘n Chase than you do in the faster paced Pac-Man. It’s not a bad thing, but there’s a methodicalness to Lock ‘n Chase which means the game boarders on being a puzzle game at times, rather than the high score arcade attack that it draws inspiration from.

There are a couple of frustrations with this setup though. In Pac-Man, Pac-Man would continue to move in a direction until you directed him to move in a different direction. If you release the D-pad in Lock ‘n Chase the man will stop dead in his tracks. The side effect to this this that the game controls are quite clunky when compared to the fluid motion of a Pac-Man in full flight – to the point where playing this game can tire the thumb out.

Additionally, you don’t get a full view of the playing field as you play. It makes it hard to keep track of the enemies, and means they can sometimes surprise you.

That said, with its greater context and more strategic play, Lock ‘n Chase is a far better, more engaging game than the more-expensive Pac-Man on the Game Boy Virtual Console. For $Aus4.50 this is a game that many people likely haven’t played before, and as such, it’s a reasonable purchase for anyone looking for a game that will put them through their paces.

The 24 Games of Christmas! Day #6; The Legend of Zelda: Link’s Awakening DX