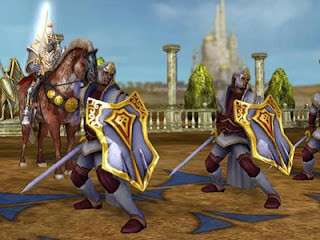 Sony Online Entertainment has released its first expansion for Magic: The Gathering Tactics.

Called Secrets of Terisiare, it features over 160 new figures and spells for people to add to their virtual deck, as well as two new tactical maneuvers that will help keep things fresh.

Cloak allows characters to remain invisible until they strike, while Charge is a powerful attack that can be used when an enemy is in direct line of sight.

There’s goodies for getting involved early, too. Log in before Friday December 16 to get a free booster pack from the expansion. Participate in an open tournament event before midnight December 18 and you’ll get an extra free spell on top of that.

After those freebies, it will cost you 299 Station Cash (the in-game currency you buy with real cash) for each additional 14-spell booster pack.

Magic: The Gathering Tactics is a free-to-download and play game, and we are quite big fans of it here at Digitally Downloaded. Are you a player? Let us know your thoughts on the game in the comments below.

Ancient Games of Nations on iPad – relive the real classics