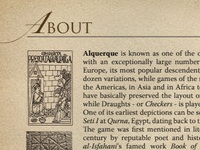 Well, here’s a rather brilliant idea. Ancient Games of Nations, a new release for the iPad, gives players a chance to play board games so old, they’ve probably never heard of them or seen them outside of museums.

The initial application is a free download, and comes with one game to play: The Royal Game of Ur, a game from Iraq that was played around 2600 BC. There are 11 other games to be released in the “game box,” and those you’re going to need to pay for (though only one, Alquerque, is currently available), but if the quality of The Royal Game of Ur is anything to go by, you’re going to want the lot.

The games themselves are incredibly simple, as you’d expect from 4600+ year old board games. For its part, Ur has a vague resemblance to backgammon. You and your opponent have five stones that you need to get from one end of the board to the other. You can capture your opponent’s pieces by having your pieces land on the same square as his/ hers, there are a few square that landing on them will entitle you to another throw of the dice, and pieces can only be removed from the board by rolling the exact value necessary to get them off the far edge. Within those three constraints there’s some strategy involved to go with the luck, but as with most of the great board games, this one keeps things simple.

What makes this application so interesting is not so much the game itself, which is technically flawless, if simple – it’s just a replication of the board and the playing pieces, with a basic randomiser to handle dice throws, and an AI that travels across nine difficulty levels, but is in reality never too difficult. No, what makes this such an appealing download is the history behind the games.

Each game has a historical bio attached for people to read, explaining how the game was discovered, and briefly how experts in historical board games managed to figure out how these games were played. Throw in some loving presentation that really recreates the feel of playing an ancient game, and you’ve really got something going that feels like more than just a game.

Buying all 11 other games in the package is going to turn the entire application into an expensive endeavour, but then again, it’s not that often you’ll get the chance to play a game that’s nearly five centuries old. I’m not going to give the application a score or anything like that, since it’s more a curiosity piece than an actual “game,” but I wholeheartedly recommend anyone with an interest in board games check this out – like classic cinema or NES-era video games, this is all kinds of retro-cool.