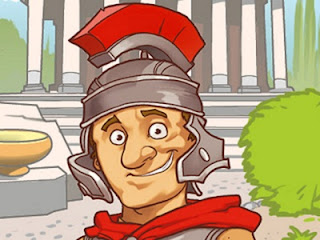 When a formula works, it inevitably attracts a host of imitators. Puzzle Quest, the RPG/ Bejewelled mix that has proven to be a massive hit across multiple platforms, is one such game. Tiny Token Empires is a mix of turn-based strategy and Bejewelled. Yes, it’s a clone, but it has merits, too.

The merits largely lie with the presentation, which is lighthearted and cartoonish. This is a game of the roman empire ancient era, with a strong fantasy twist, and so you’ll get the standard jokes about minotaurs and the various ancient cultures that populated the era. If you’ve ever read something like an Asterisk book, you’re on the right track. While nothing is laugh-out-loud, it’s enough to have you smile, and the bright visuals are a pleasant enough experience.

The game itself is as standard as this hybrid genre could manage to be. The strategic part of the game has you building a range of units and moving armies (of up to five units) around a map that is separated into regions like many board games. You’re also able to build towns and cities on some spaces, which is a nice element that adds some additional light strategy to the mix, though it’s essentially a case of “he who has the most resources to buy the most stuff will be in a better position.” 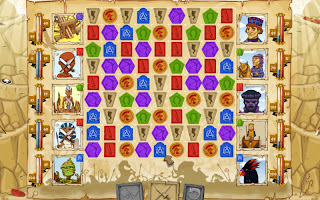 When combat is initiated between two armies, the game cuts away to a grid of squares, filled with icons of various colours. Yep, it’s time for some Bejewelled-style match-3 play! And it plays out exactly as you’d expect. On your turn you try and match three or more of icons that match a colour of one of your units. Matching four is even better; it’ll give you another turn. When you clear away icons that match the colour of one of your units, a bar attached to that unit starts to fill. Once the bar is filled to the top (more powerful units take longer that weaker units), it’s time to attack the enemy. The first enemy to run out of alive units loses.

There’s fun and challenge mixed in to this – there’s a reason developers, BiP Media, decided to so closely emulate Puzzle Quest, and its done a competent job in balancing the experience. There’s also a reasonable amount of content in the game, with a cost of campaigns as well as the ability to play random missions and quick battles. No multiplayer and no Game Center does limit its longer term value though, even to the committed.

And even though Tiny Token Empires is a perfectly decent game, it’s not Puzzle Quest, and Puzzle Quest isn’t exactly an expensive game on the iPad. This game, then, is purely for people who are really, really addicted to the formula.