There really has been a resurgence in interest in Gamebook style games. The RPG/ pulp novel mix has found an obvious home on the iPad and iPhone – devices that do the whole long form reading gig well.

A less obvious home is the PSP and PS3 and the minis download platform; after all, who’s going to want to play these when the likes of Dragon Age and a mass of JRPGs are available for players? But Laughing Jackal have made it work in the past with The Talisman of Death, and they’ve done an equally fine job with the new Mini, Warlock of Firetop Mountain.

That name might be familiar, because it’s arguably the finest gamebook of all time. The Fighting Fantasy series has had a long life (just recently rereleased in paper form), but Firetop Mountain has had a lot of additional video game attention above and beyond that – it’s available as an iPad game by Big Blue Bubble games, and it was used as the source material for a 3D dungeon hack adventure on the Nintendo DS (also called Warlock of Firetop Mountain). 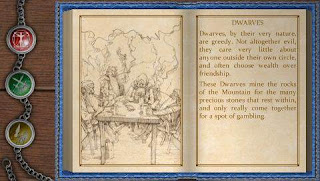 But this is the finest adaptation to date. The text is presented in a very readable format, even on the small PSP (and PSPGo) screen. Combat is handled in a very competent manner. The ambient background sounds and noises are appropriate and engaging.

While there’s not a whole lot of animation involved, the little there is tends to be rather slow to play out, so the less patient might find this game dragging its feet. But then the less patient probably don’t want to be playing a game that is predominantly text based and features the very likely possibility that you’ll die multiple times before finding your way through to the games conclusion. Thought The Warlock of Firetop Mountain is quite possibly the most fair and forgiving for players, it still has no problem giving people the Game Over screen if they push their luck too far.

But it’s in overcoming those challenges, unearthing treasure and defeating deadly enemies where this game’s appeal lies. In many ways it is a true RPG; players can make decisions that suit the kind of character they want to play, even if there’s only one or two options, and delving deep into dangerous dungeons recreates the very atmosphere that Gary Gygax was trying to capture with the original Dungeons & Dragons. 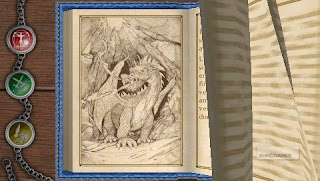 So credit to Laughing Jackal for coming up with a very workable and entertaining way to play these classic Gamebook Adventures on the PS3 and PSP. The Warlock of Firetop Mountain is, in fact even better here than the more suitable iPad and Big Blue Bubble version.

It’s just a pity that Laughing Jackal doesn’t take these talents and move them to the iPad, where they could really make this genre come alive for players.