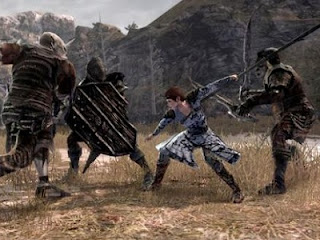 Lord of the Rings: War in the North is the exact same formula that developers, Snowblind, have been peddling for years; starting back with Baldur’s Gate: Dark Alliance on the PlayStation 2. It looks prettier when applied to the PlayStation 3, and by virtue that this formula remains fun, it is nice to see a modern Lord of the Rings game that’s worth playing, but wow am I amazed by the lack of innovation in this game.

The story should have been a dead giveaway; a dwarf, and elf and a human team up to kill orcs up the north of Tolkien’s Middle Earth. At the same time that a dwarf, elf and human form the core points of resistance in the south against Sauron (Aragon, Gimli and Legolas, and we saw those folks in the films, if not read them in the books beforehand).

On this little journey they visit Middle Earth locations that look much like the film sets, kill orcs, goblins and other nasties that look like they were taken from the film sets, and do a lot of it. It’s worth noting that though it’s not even close to being inspired or creative, the game is gorgeous to look at. It embraces the dark side of Tolkien’s epic vision, with brutal, bloody combat, horrific beasts to fight against (and those are just the regular orcs), and crumbling ruins to ignore. For the first few hours the visceral button mashing combat and Tolkien license see the game through. 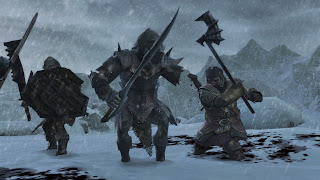 And then you realise at some point that you are playing a Snowblind game with a shiny new coat of paint. Each of the three heroes have unique skill trees, and it’s marginally entertaining to assign skills and improve their abilities and unlock new powerful special attacks. Unfortunately the level of customisation is nowhere near as great as in other hack-and-slash RPGs, and this has been a good year for the genre.

Similarly, the customisation of the heroes themselves is not up to scratch. Yes, there is a lot of loot to find and some powerful equipments on offer, but the visual effect when placed on the heroes is minimal. This is Lord of the Rings, after all, a genre of fantasy that isn’t known for its fashion sense.

It’s also a relentlessly linear quest that you’re set on, with level design that seems to crib its inspiration (or lack thereof) from modern FPSers. Run down a tunnel (literal or more abstract), and then you’ll run into a more open area where you’ll be beset by a horde of enemies. Dispatch them, run down a new passageway rinse and repeat.

War in the North’s slavish devotion to the corridor shooter philosophy is also in evidence by the many, many turret sections. If you’re one of the fortunate few not to have played one of these before: you’ll man a superpowerful turret and mow down streams of enemy hordes. It’s a carnival shooting gallery in the truest sense. It’s also barely interactive, completely inappropriate for the Lord of the Rings setting, and as I said before, far, far too common. 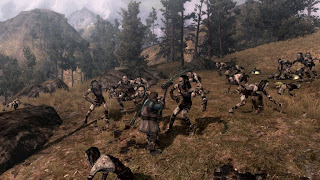 As a single player game then, this is a touch too flawed for its own good. Snowblind’s formula is creaking under its age and this won’t hold you past the end credits. The real appeal is in the multiplayer. Teaming up with two friends to take on the hordes from Mordor has a certain heroic charm to it. The flaws are more forgivable there and the game becomes a serious of beautiful, bloody Colosseum arenas to tackle as a team.

As you’d expect from a game from Snowblind, everything in this game works well, and Lord of the Rings buffs will get a kick out of the production values. It’s just a pity that we’re still waiting for that next-gen epic Lord of the Rings adventure.

This game was reviewed based on the Xbox 360 retail game. The game can be downloaded on PC via Steam. For that version, given how much of a console game this is, I would recommend only people with gamepads give this a whirl.

Digital sales will overtake retail in 2015