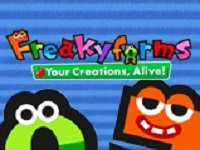 Pretending for a second that the utterly dismal Let’s Golf never happened, Freakyforms: Your Creations, Alive! is the first “true” 3DS eShop download release. And it’s a great start, taking full advantage of the creativity that cheap downloadable games afford developers to take a few risks.

Getting those risks out of the way first; Freakyforms isn’t a whole lot of a game. Superficially, it’s an open-ended platformer that sees you take your avatar (more on that later), and completing a variety of ‘quests’ for the various inhabitants of the land. Those quests are simple fetch quests, or escorting an inhabitant to somewhere else in the world, and are universally simple, designed more around providing rewards than challenge.

With no enemies to deal with, there’s very little to do in the game than wander about and unlock rewards. The game’s environment progressively becomes larger, which means more to do and explore, but this freedom is hampered somewhat by a strict time limit that will return you to the main screen once it runs down. I understand why the developers did this – to encourage people to replay the same basic stage over and over again with different characters in order to explore it all, but the strict nature of that time limit does introduce an unnecessary stress to the freedom that a sandbox game is meant to offer. 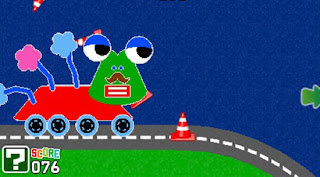 But this isn’t a game that focuses on being a game. Rather, it’s a real toybox that shines best when it’s not asking you to do anything. You’ll start by creating your avatars. These little critters are made up of a combination or arm, leg, body and head parts, and later on you’ll be able to stick more utility parts to them, such as wings. The game encourages you to be as weird and creative as possible, and the ability to create QR codes to share your creations with friends online (and StreetPass to share with those you wander past on the street) helps facilitate the spirit of creation. 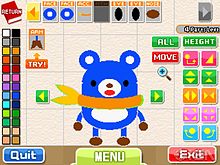 There’s also the ability to change the landscape as you go along. Everything from the trees and buildings to the ground itself can be coloured and tweaked to suit your personal mad visions. The result in the end is a completely individualised world, occupied by completely individualised characters. Thanks to the game design, even the worst artists are able to come up with something weirdly pleasing on the eye, while the truly creative are able to come up with some utterly wonderful stuff. It’s a touch disappointing to see the 3DS’ 3D put to such little use in the game, but understandable that the developers wanted to keep the game simple.

The lack of a real game powering the experience is going to put off enough people, coupled with the childish presentation means that Freakyforms will only ever appeal to a niche audience, but really, that’s missing the point. There’s more potential to this game than most, thanks to its ability to get the creative juices flowing. I certainly hope to see far more games of this style hitting the eShop in the future.