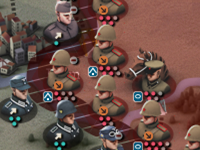 When niche publishing specialist, Matrix Games, took on the rights to Unity of Command (UoC), it was becoming apparent anybody lucky enough to be involved with this fantastic game had uncovered a diamond in the rough. A diamond indeed, for in the oft-time overcomplicated and unmanageable world of strategy games, UoC presents many player-friendly features that are as striking as its intelligent incorporation of research.

Unity of Command is a military focused turn based strategy game set on the Eastern front of WWII. In short, taking alternate turns, the player attempts to use their many and varied troops (mostly land with a bit of air) to outmanoeuvre and destroy their opponents, so as to take victory locations or defend an onslaught. Based on real battles such as Stalingrad and Edelweiss, the player (via birdseye viewpoint) takes control of their choice of either the Axis or Allies, assuming the roll of general, and attempts to achieve preset objectives.

Gameplay is addictive. Simple click mechanics allow refreshingly simple deployment, combining with an uncluttered interface to make UoC very accessible. In doing so, the developers have allowed the player to focus on the aspects that make strategy fun (with a commendable planning: action ratio). Difficulty is well designed, as geography, supply and weather plays a major influence in the player’s progression, and results in making UoC a satisfying process to master.

Progress is rewarded in two different but related formats; points and awards. Awards are given at the end of each mission and reflect the ability of the player to recreate the historically accurate objectives in appropriate time. Success is scored as a ‘brilliant’ (equivalent of a gold medal), ‘decisive’ (silver) and just ‘victory’ (bronze).

Depending on the player’s performance, points will then be awarded. Whilst the game’s hardest difficulty is something akin to a strategic version of Dark Souls (I.E bloody hard), the lesser awards and mission completion is achievable for most with some practice. Further to this, an excellent mechanic incorporated is that of ‘prestige points’. Earned through good performance, these points can be used during missions to provide reinforcements and other advantages, but when utilised, the cost is subtracted by the end score. It is a very delicate trade off! 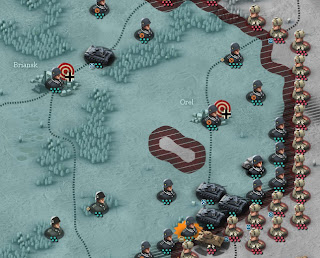 The AI is very impressive indeed and has the ability to maintain an excellent supply line, play to its strengths whilst defending a soft point, isolate a weakness and aggressively attack it without compromising its own forces. It is a greatly superior piece of programming. Hats off to a small team for coming up with a robust AI system, ensuring a number of the difficult maps need repeated attempts. Not content to sit on their laurels, the developers have also built an excellent multiplayer mode. Combining this to the AI and the design, UoC is very addictive and offers a great deal.

The strategy genre tends to not take notice of high powered graphics cards, preferring instead to take the simplistic birdseye map viewpoint. Whilst this is also true of UoC, it does perform this to an excellent extent with well rendered, accurate, gritty maps. This stylistic choice, when combined it with a quality soundtrack, well executed animations and enjoyable sound effects, just works.

Now, I would like to highlight a bane of the strategy genre: the crucial yet surprisingly ignored aspect of ease of access; in short, the ability to ‘get into’ the game. The strategy genre is blighted by its failure in communication, where a lack of coherently explained gaming concepts translates into a frustrating struggle to simply perform the basic actions required for people who aren’t already familiar with the genre, with in game tutorials typically assuming knowledge and glossing over important points.

Further, the manuals are upwards of 100 pages, consisting almost exclusively of dense jargon. Veterans of the genre tolerate this, whilst new players understandably are turned off. It is a catch-22 that is a big problem for the growth (and indeed, survival) of the genre. Enter UoC, featuring a concise, very easy to read, coherent (40 spread out pages) manual that combines brilliantly with a quick tutorial to have most players in action within a good 45 minutes. 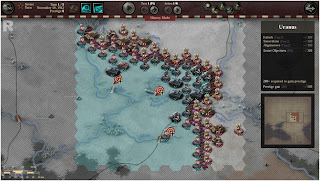 Indeed, it is this striking easy to learn nature that first marked UoC as something special. The implications of mastering this aspect are important: the game can appeal to a much, much larger audience. Indeed, it will be the first strategy title that I’ve reviewed for Digitally Downloaded that I will feel comfortable enough with to recommend wholeheartedly for genre newbies.

Another point that often impresses the strategy fan is fidelity, how strong the designer sticks to historical accuracy. Games have been rightfully dismissed and panned by the strategy community based on an inability to get this right on this, and it is understandable; if a game sells itself as recreating battles set in a certain time, it should deliver on this promise.

The developers of UoC evidently share this feeling as well, as they have gone above and beyond the call of duty (hah! pun! – Ed) in order to provide an immersive experience. Successful research has resulted in a very accurate game, where historically inclined people will appreciate the efforts to ensure that divisions of troops make their entries into scenarios at the correct time, place and with the correct people.

Further, in game mechanics represent advantages gifted to their real-life counterparts, for example Soviets have utilisation of Partisans and German mechanics are stronger. WWII buffs will be appreciated by the accuracy involved, all the more impressive considering the excellent rendering of the geographically large and important eastern front (roughly 60-70 per cent of European troop casualties and assignments occurred on the Eastern front).

A historically accurate military-specific turn based strategy which does its basics right, Unity of Command reflects that rare gem amongst strategy games: one that is simple to learn, hard to master, with an intuitive but simple interface masking deceptively deep gameplay.