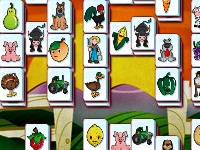 One of the weirdest things about gamers in the west is that, although Mahjong is not popular at all, Mahjong Solitaire is wildly popular.

So much so that many western gamers believe that Mahjong Solitaire is the “real” Mahjong, thanks to naming conventions that mean developers drop “Solitaire” from the name over here. It’s like saying Spider Solitaire is the only card game out there, but I digress.

Barnyard Mahjong is not Mahjong, it’s Mahjong Solitaire. The kids will lap it up, but a general lack of challenge and some poor presentation decisions means that this is by no means the definitive Solitaire game.

As the name suggests, Barnyard Mahjong is all about the animals and vegetables; it replaces the abstract (at least, to western sensibilities) Chinese characters that typically adorn Mahjong tiles with cute little ducks and pigs and smiling carrots. As with any other Mahjong Solitaire game, the objective is to remove these tiles by matching them up, but there’s a catch – if a title has another tiles sitting on top of it, or is squashed between two tiles, then you can’t remove it, you need to remove the “blocking” tiles first. 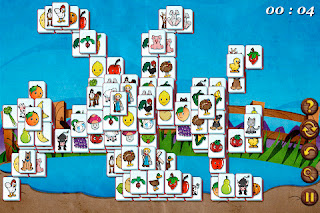 Removing tiles also creates what is meant to be a charming animal noise. Removing pigs means you’ll get oinked at. Removing ducks makes a quaking sound. Unfortunately, though the visual presentation is quite pleasant, the sound effects are muffled and are sound like the worst examples of humans pretending to be pigs or ducks or whatever that I’ve ever heard. Kids are likely to ignore that, but it definitely cheapens the experience for older people.

Also deadening the overall experience is the general ease of the puzzles. There is a lot of them – 84 to be precise, but for the most part they’re breezy experiences. There is some added challenge in trying to earn stars from completing levels quickly, but the game isn’t engaging enough to play levels more than once to earn a better ranking.

Then again, this isn’t a game for adults, since adults will be more likely to download a “proper” Mahjong Solitaire game. This is for the young ones, and the easy-to-grasp gameplay concept, coupled with the cute visual presentation and massive number of levels should be enough to keep the kids quiet on those long car trips.