Have you ever noticed that fluffy white clouds kind of look like sheep? Well someone else has too and they decided to make a game out of it. Imagine an interesting and way more complex version of a tamagotchi and you get a good idea of what to expect.

For a phone game, especially a free game, a lot of effort has gone into this game. Visually it is very nice, cute little cartoon sheep and fluffy clouds with fun 2D backgrounds. It has good sound effects which I also appreciated. 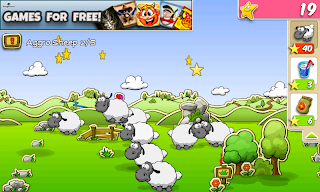 As the game plays out you need to take care of your sheep in various ways. This starts off simply with food and water the only requirements. Unfortunately this is where the game really lost me, as you level up the requirements placed upon you become so demanding that you spend the whole time frantically tapping the screen doing this, that and the other. You don’t get any time to just sit back and enjoy playing the game.

For such a simple game there is a lot of item options available which was another pleasant feature. They range from coffee to fungicide to trampolines to branding irons – all of which help you look after those sheep of yours.

I really wanted to like this game and for the most part I did like it, it’s just a shame that the pace becomes so frantic in the later stages of the game.

Crosswords and Sudoku puzzle type games have really flourished as digital downloads. This is because they are simple and easy to make, require zero effort on things like graphics and sound and they are almost endlessly repeatable. 7 Little Words has followed on in this trend but I feel a little ripped of by the price you have to pay for so few puzzles. 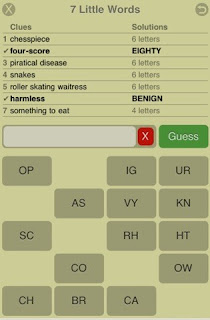 The game plays out like this: you have two or three letter combinations that you put together to form words that correspond to the given clues. That is the whole game, nothing flashy, just simple.

Now don’t get me wrong, it took someone time to come up with those clues for the particular puzzles and they deserve to be paid for it; however I had a go of doing this myself and it took me literally less than three minutes to come up with seven word clues. At $1 per set of games I think that they really should have given us more. You can pick up a crossword book for a few dollars and it will keep you going much longer than a few sets of this.

If you like word puzzle games you will probably enjoy this game but you wont enjoy paying for what little you get. Look elsewhere, there are plenty of free alternatives on the android market that will entertain you for longer.