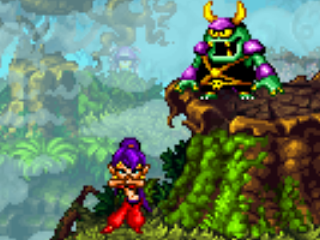 Well, there we go: the iPad can do hardcore platformers well. Shantae has just proven that.

While we’ve already seen the likes of Nyx Quest and Max and the Magic Marker make the move to the iPad nicely, those games were relatively simple as platform experiences go, with a minimum number of buttons involved and the gesture controls were easy to recreate as touchscreen swipes and taps.

What we haven’t seen is the classic kind of platformer recreated on the iPad. The kind that requires pixel perfect jumping and features plenty of enemies to kill. Enter Shantae. With a remarkably well designed virtual control setup this plays as well as it ever did on the Nintendo DS, where it was originally released as a DSiWare downloadable. Throw in a bigger screen that allows you to admire the gorgeous visuals that are the mark of a WayForward game, as well as the cheaper asking price, and guess which version is the better investment? 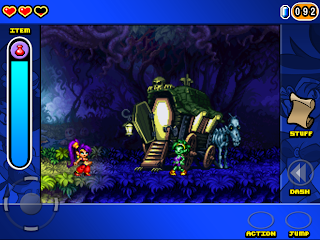 The game kicks off with Arabian half-genie, Shantae, beset by a horde of monsters. Using her trademark hair attack she cuts a path through that horde and then the journey starts in earnest. It’s visually vibrant and colourful and is backed up by a great range of Middle-Eastern themed tunes. Shantae herself has a hell of a lot of personality and the game never takes itself too seriously, throwing humour in almost every conversation.

In other words, it’s fun and charming. The world of Shantae is a land of wonder too, taking all the bright and magical themes that the mythological Arabian settings have ever managed to throw up and mixing them with some heavily exploration-based action platforming. Castlevania or Metroid-style, the game is non-linear with the only limits to your exploration being a roadblock that a new ability will open up.

See, Shantae over the course of the game acquires the ability to turn into a range of animals through performing some belly dances. These animals have all the trademark abilities you would expect of the species, and utilizing them helps get Shantae jump that little bit further and squeeze into slightly smaller spaces. So, while the game world itself isn’t that large, there’s a lot of backtracking involved to find every treasure and earn every in-game achievement (the game has full Game Center support for trophy hunters). 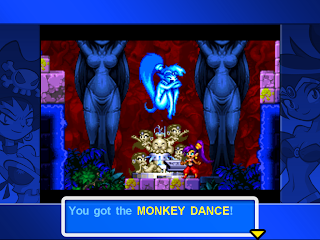 WayForward have made the interesting design choice to put the game within a ‘frame.’ The action itself takes place inside this frame, while the frame itself is dedicated to the virtual buttons, items and keeping track of your accumulated treasure. It’s a brilliant solution to a common complaint people have of iPad games with virtual buttons: that using those buttons means fingers obscure the gameplay. It doesn’t happen in this instance.

Those virtual buttons themselves word brilliantly for the game, and are easily the best virtual buttons on the iPad to date. The thumbstick is responsive and accurate. The action buttons are placed comfortably and in such a way that you don’t need to look at the bottom of the screen to find them. And all of that is just as well, because Shantae can become challenging and require some very accurate platforming skills at times.

The game doesn’t outstay its welcome – it’s easy to complete within a few sittings or a day, and experienced gamers are not likely to be too challenged at any stage, but the world is so vibrant that it demands multiple play throughs anyway. 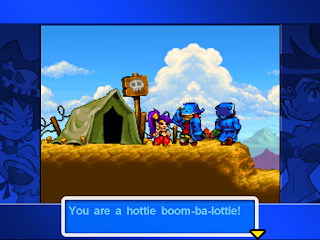 And indeed by comparison, the expensive DSiWare version (which isn’t even available in Australia, thanks to its need to be rated by the OFLC on that platform) looks pretty silly. It’s more expensive, and there’s no achievements, no demo for people to try before they buy, and a far smaller screen relegate that version to a distant second place; so much so that people who have that version may want to pick the iPad version up to have the definitive article. Having just lost Mighty Flip Champs to the PSP, the DSiWare download platform is looking less and less worthwhile.

That said, it’s nice to see Wayforward’s sassy genie get a second chance at some real exposure. She’s a mascot that deserves far more attention.