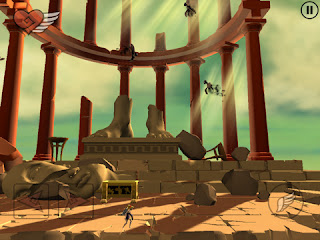 NyxQuest is one of the better games available on the Wii’s WiiWare download platform – a puzzle platformer with a striking art style and a cool setting. Chillingo, following the cue from parent company EA in bringing Max and the Magic Marker to the iPad, has done a great job in bringing Nyx in glorious HD to a platform that lacks buttons entirely.
Not that NyxQuest really needs buttons, Mario this game is assuredly not. There’s a left and right movement button recreated virtually on the bottom left of the screen, and a jump button on the right. The jump button can be tapped multiple times, because our hero from Greek mythology has wings, and the limited ability to fly. The rest of the interactions with the game happen by tapping and swiping on objects in the levels themselves. Fireballs can be “grabbed” from the air and hurled at enemies. Massive, crushing columns can be tapped on and frozen in place to allow safe passage underneath. Blocks can be guided across the burning sand so that precious Nyx doesn’t scold her feet.
As with Max and the Magic Marker, the necessity to interact with the environment, rather than press buttons to create actions, means that Nyx, if anything, works better on the iPad than it ever did on the Wii. With direct control over your actions (rather than working through an intermediary such as the Wiimote), control is far more precise in this game, freeing you up to concentrate on the puzzles and game world, rather than struggle to get things done.
It’s not the most difficult game, though there is some challenge involved. There’s 12 levels to play through (you’re looking at about 3-4 hours to run through them all), and within each of those levels are some relics hidden away in difficult-to-reach places. There’s no real reward other than completion to picking up those, but it does provide incentive to play through previous levels for a second time. For the most part the many puzzles you encounter are fairly obvious in execution. This is more a game to be experienced than struggled over, and as such completing it doesn’t have the same sense of reward as, say, a Mario game. 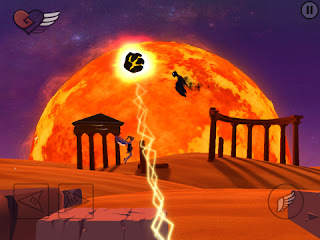 It’s also quite a lonely experience – there are some enemies that litter the levels but the game is far from action packed so those who prefer jumping on heads to the more cerebral modern platformer that’s in vogue right now might not enjoy this so much. NyxQuest offers a crumbling environment to  explore and it does feel like you’re wandering through a haunted lost city as you play. That atmosphere is reinforced with an ambient, lonely soundtrack that complements the striking visual style of the game perfectly.

Make no mistake, it’s the aesthetics of this game that make is truly enjoyable. Though it doesn’t quite hit the same artistic credibility of a game such as Limbo, NyxQuest is a beautiful, elegant game that takes full advantage of camera angles, animation, and both fore- and background design to build a highly stylised world. By turns you’ll be awed and menaced by the environment, the scale of which is often majestic.

Asking players to interact with the environment, rather than exercise control over an avatar, seems to be the way to go with the iPad and iPhone. Where virtual buttons are uncomfortable for some, tapping and swiping a screen is very naturalistic, and NyxQuest, and Max and the Magic Marker before it, show us that there is plenty of potential for iPad platformers.