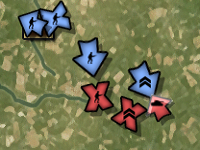 What do you get when you turn Flight Control into a wargame? Well, Pocket War HD.

It’s amazing how it works, but it does work well; Pocket War is set during World War 2, and tasks you with directing some arrows that represent your army to attack and drive off, or destroy, the enemy’s arrows. Each arrow represents a battalion in the army, and there’s a small range of them, each with unique special abilities. The tanks are fast, the big arrows represent larger forces.

Just like in Flight Control, where the goal is to direct little planes all over the place by tapping on them and then dragging your finger to the end point, so too is the basic gameplay of Pocket War and its arrows. The difference is that, rather than targeting static runways, the targets for your units are enemy arrows. 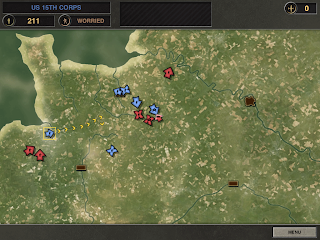 Basic military strategy comes into play. Units have morale and should they sustain too many losses or appear to be in a vastly inferior position, they’re likely to break. Units that attack from the side or the rear find themselves fighting in a very superior position. Dotted around the game’s otherwise featureless maps are towns. Occupying those as infantry allows them to entrench themselves, earning a defensive bonus in the process.

The only other real strategic at the fingertips is the airstrike, which causes real damage to one single enemy unit. You only have limited use of these, so their tactical deployment can mean the difference between victory and defeat.

The simplicity of strategy means the game is a real one of wheeling and feinting. Getting the critical flanking position is paramount to success, so you’ll be constantly adjusting the trajectories of the unit arrows in a bid to gain that advantage. Given that the task for victory is often steep (beating enemy numbers superior to yours becomes a requisite early on, and it’s difficult given how few strategic options are at your disposal), this is in no way the easy walk in the park that you’d expect for a game with such casual presentation. 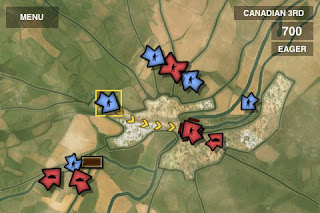 At the end of each mission (which roughly follows the events of World War 2, but you’re not going to be learning much history out of it), you’re rewarded with a score based on how we’ll you’ve performed. Game Center integration makes this a very addictive experience. There’s quite a few levels to the game, too, which helps the game last a while, though the lack of online multiplayer and a generic skirmish game is noticeable and unfortunate.

And that’s about all there is to this game. As simple and watered down as this is, Pocket War is quite genuinely a wargame, and as a more casual (though challenging) example of the genre, it’s actually good, cheap value for the armchair strategist’s iPad.