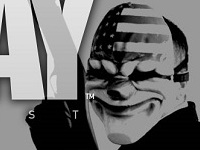 How many of you have seen the movie Heat? Y’know, with Al Pacino and Robert De Niro and Val Kilmer? It’s a fantastic movie, certainly one of the best crime capers ever committed to film, and features arguably the best bank robbing scene in the history of cinema. If you haven’t seen it, I’d highly recommend you stop reading this article and go and find it.

Watch it and then come back; I can wait. If you continue reading past this point, I’ll expect that you’ve either already seen the movie or have returned after a three hour break of finding and watching it. Either way, I applaud your efforts.

You may be wondering why I brought Heat up. Sure, it’s a good movie but what does it have to do with this review? In a word: everything. Because, you see, Payday: The Heist is Heat in a video game package.

For those who don’t know, Payday: The Heist is a new shooter released via PSN and Steam (sorry, Xboxers) that puts you in the shoes of a criminal committing a big heist. It’s a bit of an untapped concept that Overkill Software executes pretty well.

It’s a pretty different concept, really, and one that hasn’t been touched very much over the years. I imagine that’s largely because of the fact that the only enemies present in the game are police officers. We all know how much flak the Grand Theft Auto franchise has run into; can you imagine what Fox News will do to Payday once a concerned mother contacts them? The fallout could be nuclear! Yet I digress.

Payday is a game that is designed to play with up to four people. It’s actually very similar to Left 4 Dead in how it plays: you are one part of a four-person team, all working together to achieve a common objective, and you periodically have to deal with waves of enemies as you progress through each level.

Unlike Left 4 Dead, however, the end objective isn’t “get to safety” and the enemies are police “Assaults” – complete with rare types such as the Taser, the Bulldozer, the Shield, and so on – as opposed to hordes of zombies.

Each assault is announced by your tactical overseer who watches your progress and lets you know what objective comes next. His presence is very helpful and adds a fair bit of character to the game; instead of your typical Unreal Tournament-style announcer yelling “Headshot” at you, you have an unseen fifth character giving you helpful advice and directions as you go through each mission.
Payday is also much more objective-oriented than its zombie cousin; where Left 4 Dead will often have a single gated objective or some similar device in each level (the roller coaster and carousel from Left 4 Dead 2 spring to mind), Payday is always throwing objectives at you. Whether it’s planting C4 or thermite to blow open a wall, activating a drill to open a safe or escorting a person of interest, there’s always something to be done.
As mentioned above, there are six different missions; the first mission, which is probably the best to use as a tutorial, is a simple bank job, while another has you ambushing a prison convoy to free a prisoner. The only complaint that I have regarding the mission design is that a few of the objectives require you to escort persons of interest. And, as all gamers know, escort missions are the bane of video gaming. Payday doesn’t do much better, I’m afraid, though I suppose we can’t blame them.
That being said, Overkill Software has done a very good job of creating varied and diverse missions for you to embark upon with your teammates; each mission has unique objectives and unique environments to run through, with plenty of cover to hide behind when the SWAT team arrives. The level design is spot-on, creating interesting locations and landmarks that make it easy to communicate with your friends. However, there are often times when the level funnels you through a specific bottleneck and, while it is possible to progress fairly easily, the way enemies are thrown at you can sometimes turn these bottlenecks into tunnels of death and frustration.
An example: I was playing the Heat Street map with two random people online. The current objective was to escort a person of interest from a car crash to our getaway location. We were getting along fine, even despite the fact that our fourth member had quit the game; even with our reduced capacity, we were making good progress, and tried to sneak through an alley on our way to the getaway.
Of course, this course took us directly into an oncoming police assault. Worse yet, the wave threw a Shield at us, who is completely impervious to gunfire from straight on thanks to his riot shield. Add to this what seemed like dozens of police firing at us and spec ops-style guys sneaking up on us from behind and it was pretty hairy.

I eventually managed to flank the Shield and take him out, but it was already a bygone conclusion. It was a very epic moment that we very nearly overcame but it was equally frustrating in its execution. In retrospect, however, perhaps it was one of those rare kinds of good frustration – it did make me want to play again immediately.

Taking a page from Call of Duty, there are a series of challenges that can complete to level up. As you level up, you unlock different types of gear to use; different weapons, extra body armour, a deployable bag of ammo, and the like.
The biggest complaint I have about this game is the matchmaking – or, rather, lack thereof. If you want to play with your friends, it’s easy enough: you just have to create a lobby and invite them, choose whether you want to use AI bots to round out your team (if you don’t have all four slots filled) and hit Launch. If you want to play with random people, however, you are left to your own devices to find a match; the game insists you continually update the lobby list manually, more often than not showing you zero games available to join.

In the rare case it does show you a lobby that has a free spot, the game will not let you join, instead telling you the game has already been filled. If you decide to start your own lobby instead, you will have a long wait ahead of you: during one test, I actually waited fifteen minutes without a person joining which makes me question if my lobby got added to the list at all. Admittedly, these issues may possibly be blamed on my Internet connection, but I doubt it.

I’d highly recommend this game to anyone who liked Left 4 Dead but has gotten tired of the zombie fad. It’s a good shooter and a high-tension time full of fun and satisfaction. But I’d only recommend it if you have friends to play with, as the online and bot components are a bit hit-and-miss but, ultimately, Payday is a good game that delivers on its promise.
– Nick J