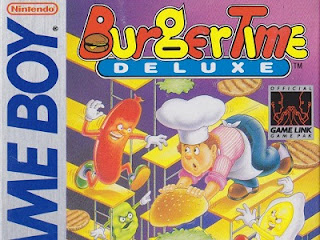 Nintendo’s done a decent job of releasing some of its true classics to the 3DS Virtual Console (Zelda, Super Mario Land 2), but aside from Gargoyle’s Quest, Catrap and Avenging Spirit, third parties have not come to the table yet. Burger Time Deluxe is not going to help change that.

Because this is an arcade game, there’s no real introduction; players are thrown right into the thick of things. Which means the first thing they see is a little chef hat dude running away from bouncing sausages and spinning dinner plates (a trip into the in-game manual claims that those plates are actually pickles, but they still look more like plates). Those sausages and dinner plates chase after little chef hat man as he walks over massive, oversized hamburger ingredients, dropping them from platform to platform until they end up as giant, completed, hamburgers at the bottom of the stage.

Frankly, the concept for the game is utterly nuts and a textbook case of when a game is too abstract it starts to become off-putting, rather that entertainingly quaint.

For those who are able to get over that hurdle, there isn’t much meat to back up the game. By the end of the 24 brief levels, the little chef hat man will have only encountered four different enemy types, and aside from a meaningless high score (after all, there’s no way to share it with your friends, and there’s no leaderboards), there’s no reason to play the game again. 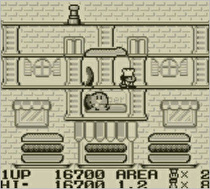 Those 24 levels aren’t even especially challenging to power through, thanks to an abundance of special items. A single hit from an enemy will cause the chef hat man to lose a life, and the only weapon chef hat man has is a pepper grinder (which can… stun… a sausage or dinner plate), but there’s plenty of ammunition that pops up to restock, and on top of that there’s plenty of extra lives to pick up, invincibility powerups and French Fries, which the sausages and dinner plates are so frightened of that picking up a packet of chips makes them disappear from the stage entirely.

It’s also possible to temporarily stun the enemies by dropping the whopping big hamburger ingredients on them from above. With all these tools at chef hat man’s disposal, it’s a rare moment indeed to find him cornered. 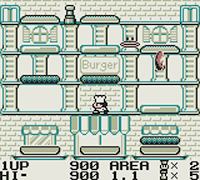 The only thing that ups the challenge of the game is the sluggish movements of chef hat man, who feels like he’s pushing through jelly at times. That led to a few frustrating deaths. Every four levels the game gives you a password so you can restart from a few levels down the track, though the 3DS Virtual Console’s ability to save games renders that largely pointless in the unlikely event that you need to use a continue.

If you can get past the overwhelming weirdness of this game, there’s moments of charm here, and though Burger Time Deluxe is far too easy for its brevity, it’s certainly a better package than, say, Pac-Man’s Game Boy edition, it’s important to remember that Burger Time Deluxe is an arcade game that has been left to history. It’s for a good reason; it just hasn’t aged well.

Shop for Nintendo eShop games on your PC or Mobile? It’s happening