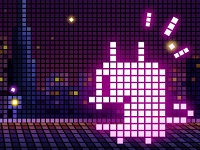 Third time lucky, as the saying goes. It applies to the Arkedo series of retro-style games, too, because while Jump and Swap were good games in their own right, Pixel is just awesome.

See, it stars a little cat. But not just any cat. A cat made of pixels. In fact, everything in the 2D platform world the cat inhabits is made of pixels. It’s a striking visual design that right off the bat gives the game an innocent and cheery charm, a mood that is reinforced by the adorable animations of the cat and his enemies, and a cheery retro-style tune that runs in the background.

It’s the kind of game that will get you smiling. That’s backed up by simple but elegant platforming. The cat has the standard running and jumping moves, and as any retro-themed platformer worth its salt, features tight controls and tiny platforms to land on. None of this floating physics of modern platformers, Pixel is old school Mario platform philosophy. 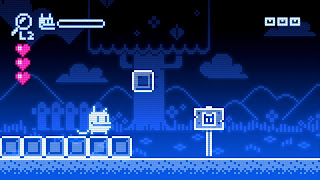 Enemies can be dispatched by jumping on them. Landing on five without taking any damage provides the cat with a screen-clearing meow attack, but that’s fairly superfluous, as it’s possible to finish the game without ever using it. Of course, some enemies have spears or spiked helmets, and you’re going to need to avoid them; jumping on them isn’t a pleasant experience.

Unlike most real retro platformers, Pixel’s cat has a life bar, represented by hearts on the side of the screen. If he takes damage, these hearts are depleted, but it’s the getting them back that’s the interesting twist on this formula. Every so often you’ll come across an ! block. Instead of breaking it by jumping underneath it, though, to access the goodies you’ll need to pull up a magnifying glass (a simple button press), and then hover it over the block. This takes you to a minigame, where you need to navigate a block maze to reach a treasure. That minigame has a strict time limit, though, so you’ll need to think quickly.

It’s a more complicated process than just bashing a block, but it’s a nice diversion that does a good job of breaking up the standard platforming. As well designed as the levels in Pixel are, that variety is a welcome one. 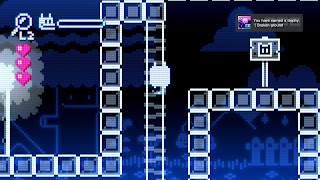 As retro platformers go, the difficulty of this one is quite low, though younger players might get frustrated by the very long distances between respawn points if the pixel cat does happen to fall to the hands of an enemy or trap. The levels are entirely linear, with little room to explore or get lost, but running through them still manages to be a varied and entertaining experience.

Is it possible to criticise the game? Sure, it leans far too heavily on the short side of things, and because the difficulty level does land on the easier side, this isn’t a game you’ll likely replay regularly. But for being short, it’s very sweet, and it’s one of the most enjoyable 2D platformers I’ve played in a very long time.

And it’s not that expensive anyway. Though this game could almost have been a PlayStation Mini (and indeed, Arkedo’s cat has made an appearance on that platform before), Pixel! is a fine PSN release, and one of those rare retro-themed games that is also very attractive to gamers who have come later to the party.

VVVVVV is coming to 3DS eShop