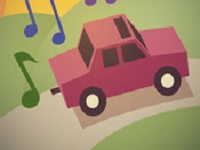 I’m not entirely sure why Isle of Tune is being classified as a game, because it isn’t actually a game at all. It’s a hugely charming little music toybox that has a surprising level of depth and reward as you get a handle of the tools at your disposal.

It’s a difficult application to explain easily, but here goes: There’s a small, roughly square island that is divided up into a square grid. The first task if to create a network of roads for cars to drive on, and then populate either side of the road with a variety of houses, trees, lightposts and other objects common to suburbia.

So far, so Sim City, right? Yep. Things start getting weird, though, when you tap on the big “Go” button. That button sets the cars off, and as they drive past the houses, trees and so on, noises are made. One noise per roadside object. The car reaches the end of the road, turns around, and does the same thing on a permanent loop, until you hit stop.

If the ‘game’ restricted you to one car then it would be a pretty boring experience. But it doesn’t. The toolset is essentially unlimited, and you can have as many cars as your imagination allows, provided they fit within the boundaries of the island. By combining cars of different roads, playing different notes, some very impressive musical tunes can be built. 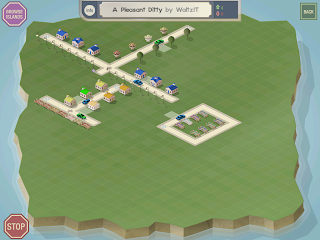 The application gives you plenty of control over the notes themselves, too. Each roadside object can have its pitch varied, and it’s also possible to adjust the note to play at the front or back of the beat, or even syncopate the beat (play the note twice in the span of one beat). Each roadside object has a different selection of sounds, from traditional keyboards right through to random noises.

On top of that, it’s possible to alter the speed in which the cars drive, and then force pauses in their movement through markers on the road. Between all this it can take some practice before you’ll be generating truly interesting music tracks, but thanks to the ultra-cute visual style, it’s a pleasant learning curve.

What’s less pleasant is the interface, which at this stage is a bit clunky and bug-ridden. The nastiest bug I’ve come across is that occasionally, when you zoom out to get a full view of the island, and then back in, the software stops recognising any changes you might want to make to the environment, and you’ll need to turn the iPad off and back on to reset it. The interface is also a little touchy in that at times you’ll want to scroll around, but the software recognises that as a command to lay down a whole lot of scenery. 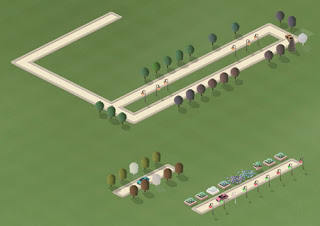 Of course, all this would be for nothing if you couldn’t share your musical masterpieces. Thanks to the power of Game Center though, you can. You can upload completed music tracks to the software’s servers, and anyone with the application will be able to log on and watch/ listen to your work. They’re then able to rate it, with a rudimentary thumbs up or down system.

The software also allows you to notify your Game Center friends when you’ve completed something, assuming they also have a copy of the software. It’s just disappointing (really disappointing) that the sharing options are limited to the software itself. Some kind of direct export option (YouTube, I’m looking at you) would have been greatly appreciated, because otherwise this little self-contained music sharing club is a touch too exclusive to get the really creative people to want to spend much time in here, and most of us are too lazy to come up with workarounds to share our work with a broader audience.

In the end, like any creative toy box (the much maligned Wii Music is another example of this), what you get out of Isle of Tune depends greatly on what you put in. It takes work to really create music loops you can be proud of, but once you get into that groove (pun intended), this is a wonderfully addictive experience.