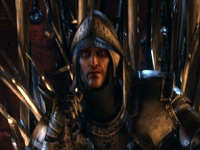 I was very excited to get my hands on A Game of Thrones: Genesis when I heard that it was marrying George R.R. Martin’s universe to the RTS genre. I’m a huge fan of A Song of Ice and Fire series and strategy, so what could go wrong?

Granted, we are talking about a licensed game so I shouldn’t have let my hopes get too high, but I really wanted it to be good. After I started playing it I really wanted to like it and I did to an extent. A couple of hours in I was thinking that this game has some interesting stuff going for it and maybe it will fully realize as I play it further in. In short, it didn’t.

This is an RTS based on the history behind the books, not the HBO TV series so if you’re expecting nudity and Sean Bean, I’m afraid the game will leave you a bit confused (wait, what? The books were filled with nudity. Disappointed panda – ed). The campaign touches on events that happen during roughly a thousand years of history and follows the great legends of Westeros through their conquests and failures.

The first few story missions were fun while you were uncovering the mechanics of how to lie, cheat and steal. Using under-hand methods to undermine your opponent was fun for a while but that aspect of the game is not realised very well.

You use your spy to create secret agreements, your noble lady to seduce the opposing units and hire an assassin to kill the noble lady. Sounds great, but in practise it makes for a very frantic peace-time battlefield. You have a lot of option when it comes to making and maintaining alliances with towns, castles and goldmines (that is how you increase your income to buy more units), but you have no way to effectively manage your alliances.

The units are so small and lacking distinctive labeling, so you are constantly clicking on every unit to see if it’s your own or an enemy unit out to do some mischief. Tracking your units on the map usually results in hopping between places on the mini-map every five seconds and by time you get your units in place you realise that the enemy has a bunch of units in your territory and is snatching your towns or making secret agreements. No notifications and the mini-map is so poorly designed that you have put your face on the screen to see those red dots moving into position.

The UI as a whole is horribly implemented and not very intuitive. It does a poor job of communicating what’s going on in the game to you and makes it hard for you to plan ahead and execute strategies. The result is you trying to react to everything that’s going on and not enjoying the backstabbing nearly as much as you should.

When you are doing all of your under-handing and backstabbing the game is in a state of peace. There are two distinctive states, war or peace. In the campaign it’s usually pre-determined depending on the mission but in the skirmish mode you start out in peace and there is a bar that fills up as the houses engage in violent actions and general war-mongering. When the bar fills up all of the factions are at war. All secret agreements are now on the table and the only way to gain territory is to lay sieges to towns or castles.

That’s when everything really goes downhill. The combat is completely uninteresting and often downright boring. You have in this game a very simple system of rock-paper-scissors and some situational bonuses which makes for a very shallow tactical game. The game also completely lacks combat animations (except for the bowmen shooting) which makes the combat also very hideous to look at. When two mounted units meet in battle, they engage in a dance of running around and clipping through each other until one of them is left standing. That’s when they actually engage. I’ve seen, on multiple occasions, units go through each other without fighting.

The Game of Thrones license is a great property for adding some flavour and lore to a bland game. There is so much material available to give a game like this some much needed character but Cyanide, the developers of the game, don’t seem to utilise the license to its fullest. It’s still satisfying in some parts of the fan in me but I would like to have seen more.

The campaign is about as light on the story as possible with barely enough to whet your appetite. Still, they do give you something and it’s fun to unify Dorne as Nymeria and conquer Westeros as Aegon the Conqueror, but epic scope of such affairs is poorly represented. Even though the game is clearly designed to focus on the smaller skirmishes I would have liked to participate in some of the larger battles that we know took place, but the game instead opts to skip the larger battles and simply describes what went on.

There is a clear effort to give it a flavour that’s in keeping with the novels. The mechanics encourage you to essentially play the game of thrones (as in, the political interplay that forms the core narrative concept of The Game of Thrones novels) where nobody can be trusted and everything isn’t as it appears. The problem is that it just doesn’t hold up through out the game and you soon become weary of the whole experience.

I’m making it sound like it’s a horrible game, which it’s not. It can be fun for a limited amount time but sooner or later the faults just start to scream at you and become hard to ignore. The multiplayer and skirmish mode are both more presentable than the campaign gameplay wise, but then you almost don’t notice you’re supposed to be playing a Game of Thrones game in these modes.

The maps are so generic with towns and castles the are labeled simply ‘town’ or ‘castle.’ They didn’t even bother naming the great lords or their splendid abodes. They are just ‘great lord’ and ‘feudal home’ even though each has its distinctive design which clearly represents Winterfell, Casterly Rock or Storm’s End. It just goes to show how desperately the game lacks soul.

Even so I did find it somewhat entertaining and I would cautiously recommend it to hardcore A Song of Ice and Fire fans with an itch to finally play a George R.R. Martin game. Just don’t go in expecting a good game and you’ll be fine.

Sonic the Sketchhog races to the App Store