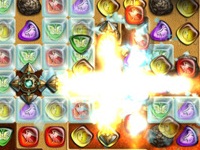 It’s rare to find a game that can genuinely stand up and claim it brings some kind of innovation to a genre as saturated as match-3 puzzlers, and I can’t claim to have played anything that is quite like 4 Elements HD.

That’s not to say that this is a ground braking piece of innovation, but just that it’s original enough that I haven’t played anything like it before. As such, this is a game I enjoyed more than most recent match-3 puzzlers that I’ve played.

What’s so different? Well, the fact that the playing fields of each of the games 60-odd levels are not restricted to a single screen. They scroll around in all directions to (especially in the later levels) form a real labyrinth of tiles and gem icons to explore. The goal is to traverse this labyrinth by removing gems (by matching them in horizontal or vertical rows in match-3 style). Doing this enables a liquid to flow into the gap vacated by the destroyed gems. Destroy enough gems and the liquid will flow to the end goal and from there it’s on to the next level. 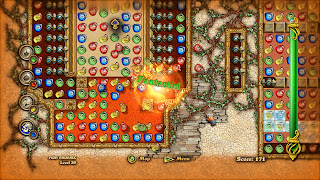 Now, if the game just featured gem-matching, then it would be a dull enough experience. But there’s heaps of special items and blocks that keep the experience fresh. There are explosive blocks that clear large areas of the playing field in one go (creating big chains of disappearing blocks has a similar effect, so overkill with gem removal is key to success in this game). There are frozen blocks that need extra effort to remove. All the time there’s a timer ticking down.

Indeed, freeing up a path (sometimes a very narrow path in the difficult levels), under time pressure is where the game finds it challenge. There’s the high scores to hunt as well for the perfectionists, and some superficial castle upgrades that you can trade points for that gives your progress a visual touch, but for the most part this is a one-play only game; the incentive to go back and replay levels is just not there. That said, there are over 60 levels, so there is a good few hours of casual gaming at play here. 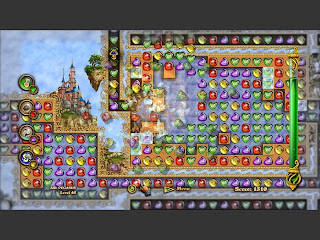 Perhaps most startlingly, this game plays well with the PlayStation 3 controller. I’ve become so used to playing my match-3 games on iPad, PC and Nintendo DS/ 3DS, all natural fits for this kind of game, that I wasn’t sure a conventional controller would be intuitive enough to work with. But it is. The cursor moves around at just the right pace to avoid being too twitchy, but not hurting the time limit either. It’s not as obvious as, say, a FPS where a puzzle game features poor controls, but it hurts the experience just as much, so thankfully 4 Elements is a painless experience.

And for those with the PlayStation Move, there’s so loving in there as well. It works as well as you’d expect, but pointing endlessly at a screen can be tiring, so it isn’t suitable for long play sessions.

There’s not much else to say about this game – everyone knows what match-3 games are about by now, and 4 Elements does a good job in adding a twist to the formula that makes the game more expansive and then more interesting for it.

Hardly a must-own, but puzzle fans or casual gamers will get a kick out of this.

Win one of five copies of indie hit, Astralia!

GTA 3 comes to iOS and Android