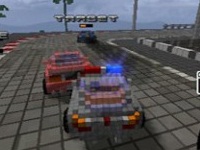 3D Pixel Racing started life as a WiiWare title. As with all WiiWare titles, it wasn’t all that cheap, and the game didn’t go down too well.

On the iPhone, it’s dirt cheap. That fact alone makes up for its rather irritating quirks, and leaves us with a game that, while not wholly recommendable, is not a bad option for some on the go racing.

Getting the good bits out of the way first – for an iPhone/ iPad budget-priced game, 3D Pixel Racing is the full package. There’s 10 tracks, multiple weather effects, the ability to reverse those tracks, a range of difficulty levels and plenty of unlockables. And it all looks great. People who played and enjoyed 3D Dot Game Heroes (and everyone should have played and enjoyed that game) will feel right at home in this mash up between the old and new. 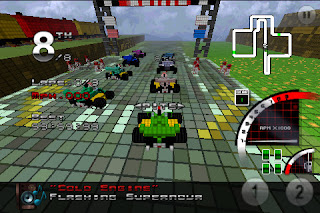 The game offers a superb range of ways to play, too. From a five track championship, to a Rally-style time trial, single race and police chase, there’s enough variety to keep people interested, too.

Then there’s the visual style. Lego-brick style; the cars, environments and race tracks are made up of little 3D pixel blocks creates a very pleasing aesthetic look. Coupled with a forgettable, but not unpleasant, soundtrack, 3D Pixel Racing does a good job of drawing people into the game.

The first of the game’s problems come from that same aesthetic design, though. 3D Dot Game Heroes embraced its building block visual style, allowing people to create their own pixelated characters. You can’t do that with this game – there’s no user generated content, which is a huge missed opportunity that makes the creative art design feel forced and ultimately superficial.

This impression is only reinforced by the racing itself. In short, it’s far too sim-like. By default cars can be damaged (requiring a stop in the pits), there’s no power ups to be found anywhere on the track, and the skill involved in this game is finding the right turning curves and breaking at the correct moments. 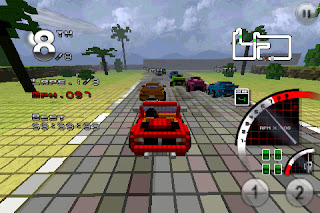 … I’m sorry, but what? Everything about the look and feel of this game is that it should be an arcade speed thrill, if not a straight out Mario Kart clone. Instead we end up with this schizophrenic game that’s not sure what it’s meant to be.

Given the alternative is to make a group of people (this reviewer included) who don’t like gyro controls use them, it’s an unforgivable flaw in the game that there’s no alternative control options.

It doesn’t matter that the gyro controls work well enough that it’s still comfortable to play, and that there’s generous AI assist to help people get a feel for the game. It’s still an inferior way to play, in my humble opinion.

(note: The iPad version of this game does have a digital slide pad, but it doesn’t work well at all – it’s far too twitchy. In that case, the ability to adjust sensitivity would have been appreciated)

But all that said and done, this is light years ahead of most, if not all similarly-priced iPhone/ iPad racers. For the cost of a coffee, it’ll last you enough morning commutes to be worth the investment.