Magic the Gathering Online is soon to receive a new horror themed set called Innistraad in a couple of weeks. This release comes only a fortnight (or so) after the paper version makes its long awaited incursion into the geek realm.

As of Thursday 13th October 10:00 AM PDT (Friday for the Australians) the online card player can attend (online) pre-release events, with the official product releases and inception into the online community occurring over the following week (Sunday, Oct 16) 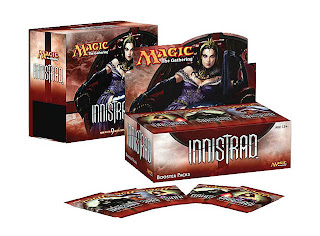 Following on the backs of the M12, this is the first ‘speciality’ themed set released in a while and you’ll see plenty of cards and abilities based on the rich literature heritage of vampires, zombies, werewolves and the humans who attempt to fight them, providing an avenue to introduce intriguing new gaming mechanics that should prove fascinating in all formats.

The most dramatic new changes appears to be the double sided cards, where various in game conditions lead to flipping, transforming your summoned powers in remarkable ways. It will have to wait to what extent this will impact on the gaming experience – but I would be lying if exploitations, strategies and potentials had not already popped into my head. Combining these with the new enchant players makes the horror theme appear truly scary.

Personally, I am very keen to get into this set. The vampire and werewolf genre may have been corrupted and mutilated by the screaming teenage girl demographic, but a magic set steeped in the conceptually rich tradition of these mythical literary beings offers a very real, very credible way of working out some issues. Far fewer judgemental stares as well.

Indeed, The Elite Inquisitors protection ability, which is specific for Vampires, Werewolves and zombies has been unofficially dubbed as Protection Twilight and I intend to use it at all opportunities.