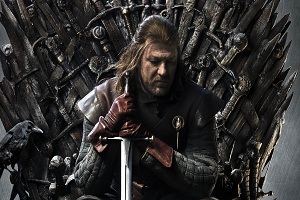 Whenever a game with a license attached to it comes out, you would do well to be wary before you buy it. Licensed games have a certain reputation around them — the fact is, they tend to suck, especially games made under movie licenses. But there are rare gems in-between that shine ever brighter than the rest.

When I heard about A Game of Thrones: Genesis, that is exactly what was going through my mind. I was expecting a generic RTS with no greater purpose then to exploit the success of the license given that the TV series met with a great reception and the fifth novel in the series, A Dance With Dragons, just came out this past summer. I was, however, hoping for a game that that would do something interesting and possibly capture some of the essence of George R.R. Martin’s world.

I’m sure you’re all wondering which scenario has proven true? Well, to be honest, I haven’t decided yet, though it appears that there is at least a little bit truth in both. I am pretty sure that the game must have been rushed out to ride the coattails of the franchise as there are things in abundance that suggest a rushed product. That being said, I am also pretty sure that Cyanide, the developer of the game, have made a real, genuine effort to capture the mood the novels.

It seems strange to me that an RTS was chosen as the given format to bring the a Song of Ice and Fire fiction to the interactive medium. The fiction has no lack of large battles but it focuses much more on the characters and the politics of the rivaling houses. Most epic battles that are fought are usually given considerably less space in the novels then the actual repercussions of them and the effect they have on the characters. 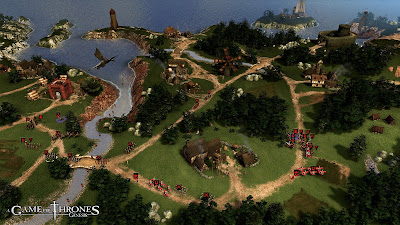 Considering that, how do I come to the conclusion that there is an attempt to make a game true to the fiction? Well, there are some interesting mechanics going on in the game that make the playing field highly unstable and you can never be sure that your progress in any given mission or game is secure. Alliances are brittle and underhanded, secret pacts are hidden everywhere and general misbehaviour seems to be the name of the game. For those of you who have read the books, you know exactly why that is in keeping with the spirit of the fiction.

The way the game plays is that you start out in a map dotted with a number of towns, castles and gold mines. You have to gain the favour of these establishments and make alliances to increase your revenue and bring in food so that you can build units.

You have a number of choices when it comes to gaining territories and there are some interesting ways to go about it. The straightforward way is to have an envoy go to the nearby town to make an alliance for you to gain its resources and everything is in the open; the town gets your sigil on its shield and it is officially yours. But beware, the enemy can use a spy to make a secret alliance which you will be unaware of unless you happen to notice that no income is coming from that particular town. He then gets half the earnings the town generates and you nothing.

The envoy you sent might also have been a turncoat. The enemy might have planted a spy that is acting as an envoy or he might have used a rogue to buy off your envoy. In both cases the actions of the envoy are false but the town still appears to be yours. The way to encounter that is to hire a noble lady to go to the town and make a blood alliance. That way the town can’t have a secret fealty to your enemy, but then you have to make sure to watch the town closely because your enemy might hire an assassin to kill the noble lady and thus canceling the blood alliance. 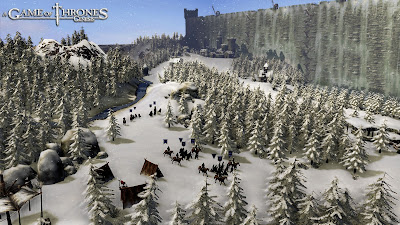 This is an example of the strategic elements you have to pay close attention to during the missions. In the heat of the game towns are changing hands rapidly and deception is rampant. And these are all peacetime concerns. During war things are actually a lot more straightforward and strangely enough less frantic, at least at the stage of the game I’m playing right now. During war you recruit armies and deploy them in a pretty simple rock, paper, scissors fashion. The warfare might get more hectic later on but I have a feeling that the peacetime efforts are intentionally more demanding. This is a splendid way to represent the mood of the book series but I will have to play more to see if it holds up through the entire game.

Despite some interesting mechanics and the apparent faithfulness to the fiction, the game feels rushed. Where some aspects of the game make me want keep on playing others make want to turn my back and never pick it up again.

The user interface is a mishmash of decent implementations and poor design choices. The layout makes it easy to track how many of each unit you have but I’m having a hard time tracking their location. In the middle of a heated game it’s essential to know where the important units are for what you want to do but here it’s a bit hard to do that.

The enemy units are also hard to distinguish between when it comes to choosing a unit to counter them or making sure you are attacking a rival house. You don’t want to be chasing an ally around the map and leaving the enemy free to harass your forces. The only distinguishing factor, as far as I can tell, is the color of the unit icon but the house it self and affiliated towns display the sigil but not the color. 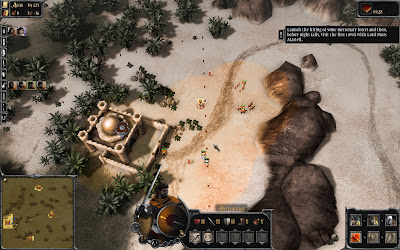 There is also evidence of some horribly sloppy background work. The loading times are awful. I can take up to five minutes to load up the campaign and after that you still have to load up the mission you are about to play and if you fail on a mission be ready for another long loading screen. And not all. It’s been a long time since I’ve seen so many spelling and grammatical errors in game. You almost feel like your playing a Japanese game from the nineties. Not good when the developer claims that the game was written under supervision of the author. I know they probably didn’t submit the actual text to George R.R. Martin himself but this just looks bad for all parties involved.

A Game of Thrones: Genesis is not in fact A Game of Thrones game but more of A Song of Ice and Fire game. It mostly takes place prior to the events of the novels and it is based on the wealth of Westeros lore found in the books. It spans a 1000 years of history covering events from Nimeria coming ashore in Dorne to Eagon the Conqueror uniting the continent under the rule of the house Targaryen to the War of the Usurper. I’ve been playing the Nimeria part and I have to admit it appeals me as a fan of the book series but I feel they could have added more flavour in amongst the swarm of generic towns and castles. The material exists in the book which the developers don’t seem to be utilising to its fullest.

So far, I‘ve played through the tutorial, a half a game of house vs. house and finished about six or seven missions in the campaign. I have a feeling that there is a lot more to this game so I’m not ready to make a judgement just yet but look for the review proper in the coming week, and reservedly I recommend it to people who are fans of Martin’s universe.