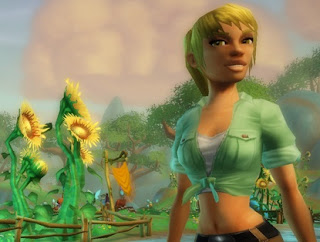 Since its launch back in 2009 on PC (and a more recent launch on PS3s), the minigame-heavy formula has apparently resonated well with the youngsters and those not willing to shell out for World of Warcraft.

The big question is how many keep playing, but when I briefly messed around with it recently the world seemed populated enough. Of course, I haven’t been back, since this MMO has way too much premium content that costs real money for me. I’d rather just pay a subscription.

For the Free Realms fans, there’s some neat Halloween-themed stuff happening. According to the press release: “SOE is also hosting a Free Realms Spooktacular in-game event where fun tricks and treats will be available for players to claim when they log in. From October 24 through November 7, 2011, players can log in to take part in several bone-chilling special events such as the Vampire vs. Werewolf Dance-Off in the Bone Bog Cemetery. Additionally, players will have the opportunity to purchase a new Werewolf mount for haunting in style, as well as new ghoulish Halloween costumes, including a Ghost, Grim Reaper, Mummy outfit, and more.”