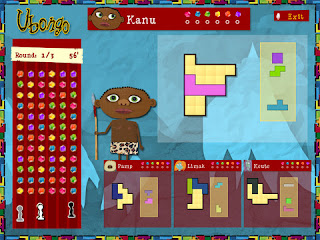 The iPad has no shortage of really, really good board game adaptations, and indeed at times board games are now being specifically designed for Apple’s tablet without ever seeing a physical version.

With that in mind, a middling board game such as Ubongo has its work cut out for it when it comes time to bring it to the iPad. It was always going to struggle to compete with incredible games such as Samurai, Ticket To Ride or Puerto Rico. The developers have done a decent job here, but at the end of the day it’s still a middling board game.

Ubongo, for those who haven’t played the game before, is a game of two parts. The main part is a puzzle-style game in the vein of Tetris mixed with tangrams. Each player is given a large shape, and a handful of smaller shapes. It’s a different set of shapes each round and the goal, in each round, is to fit those smaller shapes neatly into the larger shape, with no overlaps or gaps. 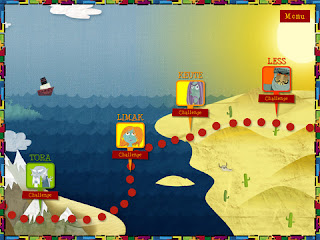 The person who does that the quickest gets to take first pick of the other board, where there’s a few rows of coloured gems lined up in neat rows. After the player picks a row, they get to take the two closest gems. The goal is to, over a predetermined number of rounds, get the largest number of a single gem colour.

It’s important to win rounds to make sure you can control the gems that you do pick up, but for the most part this is a very simple game with very simple strategy, it’s clearly a game more for the families than the adults, and the educational elements involved with tangrams and such are in full force in this game.

There’s a couple of problems that do hold back the iPad version of the game. When building the tangram-style shapes players can rotate blocks by tapping on the shape once, and flip the shape entirely with a double tap. The problem arises when the brain and fingers start working too fast for the engine to handle, and what was meant to be two rotations flips the tile instead. In a tight game against the harder AIs, that’s usually enough to lose the round and likely the game. 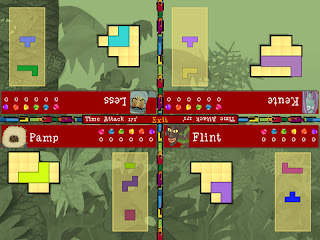 In addition to the basic game is a story mode, which is wholly uninteresting, and a split-screen multiplayer game. The latter is a nice attempt to bring the fun of the real board game to the digital form, but the screen real estate is a bit limited in practice. Then again, the computer AI isn’t inspirational (though it can be frustratingly fast on the higher difficulties), so you’re kind of stuck between a rock and a hard place when it comes to finding the ‘right’ way to play the game.

That said, the presentation is pleasant enough, and the core idea behind the game is sound, if not altogether inspiring. While there are most definitely better board games available on the iPad, this one could be a good idea for people with young’uns as a subtle way to educate them, without them realising that they are indeed learning as they play.

Digitally Downloaded poll results #4: Are there any genres that can’t work on iPad/ iPhone?