The Impossible Game is not impossible. It’s really, really challenging, but it’s possible to complete it.

It’s also quite old. The game was originally released on the Xbox back in 2009. Why it’s taken nearly two years to make the move to the PSN Minis platform, I have no idea. But the good news is it’s here, and it works really well.

Of course, it’s not a hugely original game. The “character” as such, is a bright orange square, moving in a linear fashion across a flat plain. The player’s job is to jump spikes and pits that are littered on the path, and generally avoid running into anything nasty. Yes, this is one of those one button auto-run games that are so popular on mobile devices.

What sets this game apart is the close role the music plays in the experience. Musical highlights occur when the little orange square needs to do something important, like jump. It’s by no means a rhythm game, as the player input doesn’t actually cause the music highlights to happen, but there is a close fusion between what is a pretty awesome soundtrack, and the on-screen action. 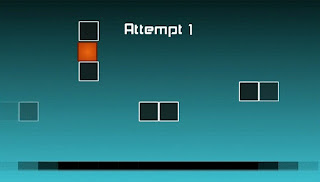 What is also relatively unique about this game is that although it’s supremely difficult at times, it’s never frustrating. The game keeps a ticking counter at the number of attempts you’ve taken, and each failure puts you back at the start of the level. At 50 attempts, you’ll happily restart the level. At 100 attempts, you’ll keep plugging along.

Indeed the game somehow turns into something zen and relaxing as the basic colours whirl past the orange square. The reasons for this remarkably relaxing approach to difficulty are twofold: firstly, the levels themselves are short. “Dying,” doesn’t result in that much backtracking. Secondly, because the deaths happen for a purpose; every ten or so attempts you’ll make some progress. It might be just the one obstacle, but it’s enough to feel satisfaction and the “just one more go” impulse with then be strong.

There’s not a whole lot else to say about the game. Astounding difficulty aside, there’s not much meat to the game, and a lack of leaderboards and trophies limit the replay value once you’ve beaten the impossible.

It’s still a great PSN Mini, but it’s as disposable as games come.

Is Nintendo focusing on the Japanese market too much with the 3DS?