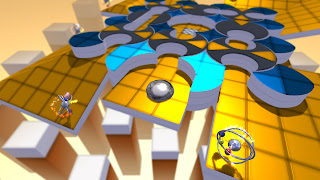 Mercury Hg: Fun AND educational. Except not really. Why the developers and publishers decided to use their media releases to tout the “periodic table” structure that serves as Mercury’s branching level it was a very strange marketing decision indeed, as the only thing high school chemistry manages to teach many of us is that the periodic table is a pretty dry subject.

The plus side from going into Mercury expecting a lesson in chemistry is that once you get into the game it utterly blows you away. Dry? Hells no, this is one of the best puzzle games this side of Lumines when it comes to raw energy and excitement.

And like Lumines, the secret behind that energy is in the music. The difference is, where Lumines relies on its own pulsating soundtrack Mercury invites you to use your own music that you’ve got stored on the PlayStation 3 as a custom soundtrack. With each song the background and environment vibrates with musical energy and -assuming you are using music you actually enjoy listening to – the interplay between music and visuals creates a vibrant, rhythmic audio visual experience filled with electric colours, and the game quickly builds a visceral urge to match your own movements to the custom soundtrack.

Another game on the PlayStation Network did something similar, to equally great effect. Space Invaders Infinity Gene’s most entertaining game mode was the custom soundtrack part of the game even though that acted only as an added bonus in that game. In Mercury Hg, it’s core to the whole experience.

That experience is backed up by a game that is, ultimately, fun to play. For an idea on how the gameplay itself works, imagine SEGA’s Monkey Ball series if the monkeys and balls we’re melted down into a semi-solid liquid, and you’re more or less at Mercury. For an even more appropriate analogy (though perhaps one that only older readers will understand); if you remember the old wooden Labyrinth games then this is exactly the same concept only instead of a metal ball bearing the goal is to navigate a fluid through the winding maze. 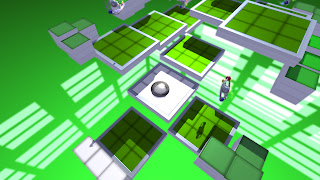 This isn’t the first game in the series of course – it’s been a PSP mainstay for years – and the gameplay will be familiar to people who have played the previous titles but the core remains compelling and easy to get into as a newcomer to the franchise; take a blob of mercury and by tilting the environment get the blob to an end goal.

A handful of introductory levels walk players through the more complex ideas that give the game its challenge; sometimes you’ll need to roll the mercury through gates which will ‘colour’ the blob of metal, allowing you to enter paths restricted to those corresponding colours. Then there’s magnets which naturally attract liquid metal such as mercury, as well as repulsion devices that just love to hurl the blob off the level.

The last trick to learn is the occasional need to use an edge of a wall to split the mercury blob in half, send both halves through different colour gates, and then rejoin them, with the two colours mixing to become an entirely new colour.

The puzzles become devious quickly after the tutorial, especially considering that you’ll need to think quick; at heart this is an action puzzle game and time matters when shooting for the high scores. A leaderboard pops up at the end of each and every level to remind you how good (or bad) you are at this game and then it’s quickly on to the next level. The developers clearly wanted people to be spending time playing this game, rather than wading through menus and options. 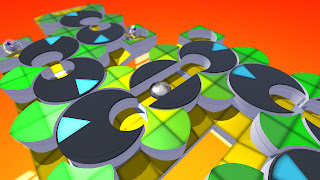 Thankfully the difficulty is not the kind that generates frustration. The controls are tight and the physics are spot on. Thankfully mercury, as a liquid, is not as fluid as water, and the more “sticky” nature of the metal means that it’s easier to keep everything under precise control than other games that use water as a muse.

There’s even the ability to use the PlayStation 3 controller’s Sixaxis option to bring some motion control into the game, though the conventional dual stick controls are comfortable enough.

And there’s not a whole lot more to Mercury than this. That said, given it’s such a budget priced game, there’s still a lot of content for the money. There’s a lot of levels to play through, and though they’re all individually quite short, anyone who can fly through them without a few retries is a true gaming God.

As an audio-visual experience (especially at the PlayStation Plus reduced price), this game is a must have. The enthusiastic energy it goes about its job is more than enough to make up for the abstract idea that this game was to be based on science and the periodic table. Thank goodness that abstraction didn’t follow through to dry up all the fun in this liquid adventure.

Ubisoft’s I Am Alive apocalypse getting ever closer